I’m glad I still check out my old student newspaper, because I found this wonderful story (emphasis mine):

Indiana regulations on homosexual marriage could be ignored for a Purdue Director of Communication in the College of Education and her partner when they entered to win a wedding in Washington, D.C., where binding their love is legal. Tonya Agnew and her spouse Amy Crampton received an e-mail that could bend the rules of gay marriage and reinforce love with no boundaries.

With a 200 word essay, any gay couple could enter to win a $100,000 wedding ceremony in the nation’s capital. Expenses could cover anything from the rings to the flowers to the entertainment. The winner is determined through online voting that ends Sept. 30. Anyone can vote in the contest, Freedom 2 Wed.

Agnew and Crampton are one of six finalist pairs that anticipate Thursday’s results, waiting to see if other applicants beat their first place standing of over 4,000 votes. Even though they live in a conservative state, putting faces to their names has brought overwhelming support and encouragement from friends and strangers.

“I was pleasantly surprised with the responses we were getting and many people have come up to us and thanked us for doing this,” Crampton said. “I started crying.”

Not only has this been an exciting experience for Agnew and Crampton, but marriage directly influences the lives of their two sons, Jesse, 17, and Leo, 7. The affirmation of their family was the primary inspiration for partaking in the competition, but it was also about letting the voters know that they are as equally committed to their family as anyone else.

Former co-worker to Agnew, Jennifer Jeffries, said winning will highlight compassion and love regardless of sex, because communities like Lafayette and Purdue are strengthened by the presence of strong and caring families.

“Tonya and Amy love each other, but they didn’t enter the contest to make a statement,” Jeffries said. “It is a response to their 7-year-old who couldn’t understand why, in the land of the free, his parents couldn’t marry.”

The eldest son, Jesse, has been an advocate for their cause and believes that his parents should have the same rights and freedoms as any other citizen. For that reason, Agnew says that having an actual ceremony where they will be legally recognized demonstrates that “if it’s good enough for our nation’s capital, it should be good enough for the rest of the country.”

Since the role of Crampton and Agnew as a joined family has become exceedingly more important to their children, their status as public figures and leaders in the gay community is also having an impact on Agnew’s work at Purdue.

“I feel responsible to be available and out and proud, especially for those who can’t be for whatever reason,” Agnew said. “Hopefully we are raising awareness and breaking down misconceptions.”

It’s not being out at Purdue, and it’s even harder being out in the rest of Indiana. What these women are doing is brave, and will hopefully serve as an example of how loving and normal gay couples can be, just like any heterosexual couple. It’s a message Indiana definitely needs to here.

I’m sure any of the couples in the competition are worthy of winning, but I’m going to play favorites for my Alma mater and ask that you vote for Amy and Tonya here. Voting ends 11:59pm EST TONIGHT, so please hurry! They’re in second place – let’s have Blag Hag readers get them into first.

Need more convincing? They even stopped by the Society of Non-Theist’s Blasphemy Day event today and took a photo with our secretary. 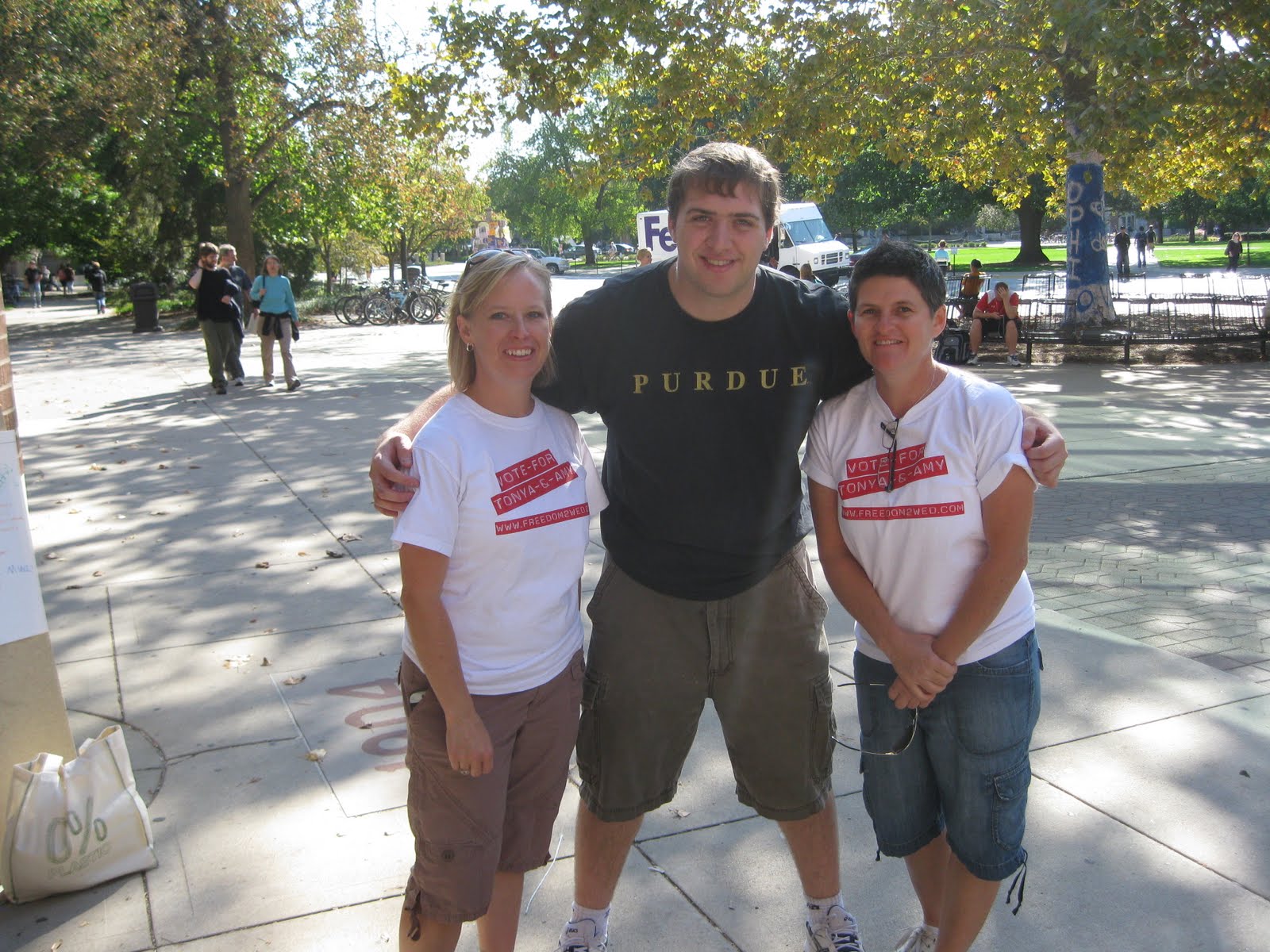