Your personal opinion does not trump scientific studies

As a scientist, one of my big pet peeves is when someone tries to use a personal anecdote to disprove a scientific study. “Cigarette are bad for you?! But my grandpa chain smoked until he was 96, and he was healthy as an ox!”

Great for your grandpa! …But that’s irrelevant.

The whole purpose of science is to reduce our biases. Looking at your sample size of one (Grandpa) is going to lead you to the wrong conclusion about what’s going on with smoking. Your grandpa was an outlier – and while that is interesting, the vast majority of people suffer harmful effects from smoking.

But my bigger pet peeve is when someone’s culture, personal opinion, or political belief stands in the way of them accepting science.

For example, during our unit on aggression in my Social Psychology class, we talked about cultural causes for aggression. One example was the Southern Culture of Honor. People who grow up in this culture see a perceived insult as a threat to their ego, which increases testosterone levels* and violent cognitions, and can lead to acts of violence. Southern cities and states have much higher White homicide rates than those populated by northerners**, and in Southern states homicides exceed suicides.

Effects of Insults on Testosterone levels in Southerner and Northerner Participants 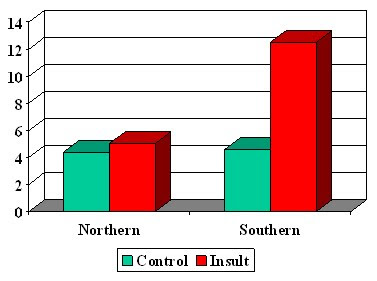 When I mentioned this in a tweet, some of my Southern followers got angry and said it wasn’t true, and tried to provide anecdotal evidence about how kind and helpful Southerners are. Your neighbors may be sweet, but that doesn’t negate an overall trend. Scientific studies aren’t saying that all southerners are homicidal maniacs. Though you know, getting angry at a perceived insult doesn’t exactly help your cause…

Another topic within aggression that really riles people up is spanking. Numerous studies have been done showing that spanking children increases antisocial*** and aggressive**** behavior. But when people who have been spanked or spank their children hear about this, they get very defensive. I can’t recall the number of times I’ve heard “Well I was spanked, and I turned out fine!” or “I spanked my kids and now they’re little angels!”

I’m sorry, but 1) Your specific experience does not negate the average response seen in hundreds of families, and 2) Your evaluation isn’t necessarily correct. You could very well have had an increase in antisocial or aggressive behavior, but you didn’t have a psychologist assessing your behavior, did you? I’d really like to see a psychological study on why people like to defend spanking. Do they hate thinking that their parents did something wrong? Do they hate having to come up with a better (and possibly less easy) disciplinary action?

And last, but not least: political beliefs that get in the way of accepting science. The one that bugs me the most are feminists who are such huge supporters of female equality that they simply cannot accept that males and females do differ in certain ways. For one, you kind of can’t ignore that (biologically typical) males and females differ physically – we kind of have different reproductive organs and chromosomes. We also have different secondary sex characteristics – males are going to be slightly stronger and larger on average.

And because our biology differs, it’s not insane to suggest our psychology differs. Saying men are better in some areas and women are better in others does not mean one is superior to another. Saying men may have certain mating strategies and females may have different ones does not mean one is morally superior, or that either are things we should actually do – humans are not simply slaves to their biology, after all. There are differences between the sexes in almost every species where there are two different sexes – humans aren’t exempt. To deny these differences because they don’t jibe with your political beliefs is simply unscientific.

Now, I know I’m not perfect. There have definitely been times where I’ve been skeptical of a study when I personally didn’t like the results – it’s human nature (especially when the study is saying something delicious is bad for your health). But the thing about being a scientist is reducing our biases as much as possible. So next time you find yourself giving anecdotal evidence, remember: Your personal opinion may be an interesting new hypothesis, but until you do a study of your own, it does not trump previous scientific research.