Women and Feminism at TAM8

I’m not going to go too in depth recapping all the talks at TAM8 for three main reasons:

But I do want to comment on women and feminism at TAM8, especially since this was a bit of an issue last year. Keep in mind this is just my experience from a single TAM, since it was my first time going. Even though I remember all the blog posts from last year, I can’t fairly compare it to past events.

The conference wasn’t perfect, mainly because skeptics don’t live in a little bubble sheltered from society. The good definitely outweighs the bad, but I still need to point out the bad. So, let’s get it out of the way.

The one annoying thing I saw was the perpetuation of the Sexy vs. Smart binary in talks. The stereotype goes that women can sexy/attractive/beautiful and stupid/ditsy/unscientific, or they can be smart/witty/scientific and frumpy/plain/ugly. This myth annoys the hell out of me, especially because it’s so common. It simply is not true – you can be hot and smart, and you can be “plain” and stupid. I hate people assuming I’m an idiot because I like to talk about sex or wear a low cut shirt now and then. And I’m not even very feminine – I can’t even imagine how often “conventionally” attractive and feminine skeptics and scientists have to deal with this.

The main perpetrator was Michael Shermer, who included the following video in his talk:
[youtube http://www.youtube.com/watch?v=buoRVFB9MKY&hl=en_US&fs=1]
Oh, gee, using hot airhead women as an example of people who aren’t critical thinkers! Uhhh…no. The only way this contributed to his talk was by making me uncomfortable. If that was his goal, he succeeded.

And while I fell in love with Harriet Hall, she did the same thing. [EDIT: Apparently my memory is faulty and this only occurred sometimes in her talk, and Barbara Drescher makes a good point as to why this is acceptable in McCarthy’s case] Whenever Sometimes she mentioned Jenny McCarthy in her talk as an example of someone saying something stupid (which Jenny McCarthy certainly does often), she would include a picture of her bending over in a bikini or some other scantily clad outfit. Why was this effective? Why not use a photo of Jenny McCarthy in a suit?

Because we’re programmed to go “Ha, look at that stupid bimbo!” or something along those lines. We associate beauty and sexuality in women with ignorance. It was used for cheap laughs, and the audience delivered. If we’re judging someone based on their intellectual merit, we shouldn’t be using irrelevant bikini photos as pot shots.

I don’t have the exact numbers (maybe the JREF will release some info), but there were a lot of women at TAM this year. Still not an equal 50/50, but getting there – maybe 60/40. I definitely did not feel out of place.

From a quick glance at the program, it seems like men definitely outnumber women. Not hugely so, which is an improvement, but it was still noticeable. Now, I don’t think you can necessarily blame TAM or even the skeptical movement for this. When sexism permeates society like it does, there are a whole host of reasons why you may not see women in as prominent roles. By the time you’ve reached the level of accomplishment to be invited to speak, a whole slew of other institutions and people have had the chance to drag women down, thus limiting the number of qualified women.

And according to a conversation Hemant had with Jeff Wagg, JREF does try:

Jeff Wagg of JREF points out that they’ve actively reached out to women. Last year, 8 women were invited to speak at TAM. 2 said yes. 1 of those women had to cancel. It’s not like they’re not trying.

Even though men outnumbered women, the ratio wasn’t that horrible. Still looks way better than most science departments I’ve seen.

The real interesting data comes out when you break the speakers down into categories. I’ve divided the various events into talks (solo speakers), panels and interviews, and extra workshops: 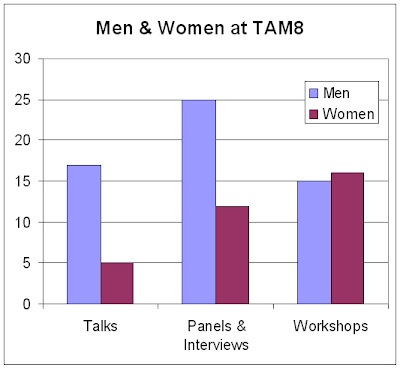 The ratio of men to women was 3.5:1 for talks, 2:1 for panels, and 1:1 for workshops. Why? Any answer I could give it purely speculative, so I’ll leave it for the discussion as to why you think this is. It is interesting to note that the less individual contribution required, the more equal the gender ratio.

I have to note that I absolutely loved all the female speakers, and that seriously is not me being biased. I’m not the type to like someone by default just because they have certain genitalia or chromosomes or hormones or whatever (side note: whoever told you sex was simple was wrong). Their talks were some of the best at TAM, so don’t let anyone tell you that women are being invited to speak just to fill some quota. Since people are always asking me for awesome female skeptics to follow, here’s their information:

One great thing about TAM was that it had not one, but two sessions explicitly devoted to exploring women’s issues. The first was Feminist Skepticism Workshop with Rebecca Watson and the Skepchicks. As you can imagine, I was really excited for this workshop. I think it did an excellent job at showing how feminism is compatible with skepticism, and how various skeptical issues affect women.

I also loved Vagina Craft Time. Here’s me with my angry felt vagina: 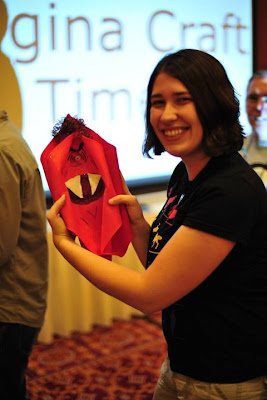 And while that seems silly, it did serve a purpose. One, it was a nice intermission to all the serious information. Talking about rape and sexism for two hours can be taxing on anyone, so it was nice to have some light hearted humor injected in. Two, it forced the audience to form small groups. While we were in groups, we discussed a skeptical issue that was assigned to us and how it affected women. After craft time was over, everyone had to share what they discussed. Without this fun activity, it would have been very difficult to force people to participate.

I think, though, it may have been a little too silly at times. For example, after each major serious topic, Rebecca inserted silly cat photos to lighten the mood. I’m all for silliness, but random lolcats after seriously discussing rape just didn’t sit well with me. Make your serious point without undermining it, and then inject humor later. From the awkward half-laughter in the audience, I think others agreed with me. The lady sitting next to me even commented, “Great, who’s going to take feminists seriously now?” after the first lolcat. I wouldn’t go quite that far, but I agree that it was a bit in bad taste.

The other event at TAM was the Women in Skepticism Panel with Rebecca Watson, Carol Tavris, Jennifer Michael Hecht, Pamela Gay, Ginger Campbell, and Harriet Hall. It was an excellent discussion of what it’s like dealing with male dominated fields and sexism and a female skeptic. It was really nothing new to me since I’m familiar with the issues, but it would have been excellent for anyone in the audience who maybe hadn’t thought about this before.

Before I went, I admit I was a little nervous. I had been warned about the low number of women, some sexist jokes, and hordes of creepy stalker guys that would follow me around. Maybe it’s because I started with my guard up or maybe it’s because TAM is improving, but I really didn’t think it was that bad. At least, not any worse than any non-theist club meeting or biology conference I’ve been to (…which probably isn’t much of an endorsement after all, hmm). I’m definitely looking forward to going back in the future. And I’m sure with the way things are quickly improving and all the hard work the JREF is putting in, it’ll be even more awesome and comfortable for women next year.

But I’m just one woman. If you were at TAM, what did you think? Men are welcome to comment, but I’m especially interested in how other women felt. Were you comfortable? Did you run into any other incidents of sexism? Do you have any suggestions on how TAM could improve in the future?

Previous postSex, Evolution, and Homeopathy Next postInterview about the aftershock from boobquake