The Obama administration mandated that health insurers cover birth control, and the ongoing drama is being framed in respect of the repression of poor, poor Catholics. How dare the government infringe on their freedom to police women’s bodies through their religion, blah blah blah. The next time someone brings up the Catholic aspect, obliterate it with the following three points:

“At a more fundamental level, though, the HHS rule simply doesn’t violate a cognizable free exercise right. In 1990, the Supreme Court decided a case called Employment Division v. Smith, 494 U.S. 872 (1990). Two men, members of the Native American Church, used peyote in their rituals. They were employed in Oregon as counselors at a private rehab clinic. Oregon outlawed peyote, with no exception for religious use. The men were subsequently fired once their drug use was discovered, and applied for unemployment benefits. The state of Oregon denied them benefits because – guess what? – they were fired for committing a crime under state law, and had committed work-related misconduct.

The case found its way to the Supreme Court, where the court set down a new rule. The standard for determining if a regulation burdened the free exercise of a religious adherent or organization was whether the law was neutral toward religion and generally applicable, lacking any pretext designed to obscure a hostility toward religious practice. The court even stated that to permit otherwise under the First Amendment “would be to make the professed doctrines of religious belief superior to the law of the land, and in effect to permit every citizen to become a law unto himself.”

The author of this religion-destroying opinion? Noted Catholic Antonin Scalia.”

2. It’s not even about religion, it’s about gender:

The polling data backs this up; Catholics and non-Catholics support requiring all employers to cover insurance in roughly equal numbers. In fact, Catholics are slightly more likely to do so than the general public, mainly because evangelical Christians are suppressing the overall support numbers; only 38% of them want the mandate. What we’re seeing here is fundamentalist evangelicals and fundamentalist Catholics using ordinary Catholics as cover to push a misogynist agenda. I know, shocking, right?

But there’s another aspect to this story I want to talk about. The polling data makes this clear that there’s no conflict between Catholics and everyone else. But there are two groups that show huge divergences in the polling data on this: men and women.

“However, women were significantly more likely to favor free contraception through employee healthcare plans at 62 percent versus 47 percent of men, while 54 percent of women agreed religiously affiliated colleges and hospitals should provide this coverage versus 43 percent of men.”

The religious arguments have no real effect on men’s support or non-support of it; they either think it’s a benefit or they don’t. And the majority don’t. The spread between men and women on whether or not contraception should be a covered benefit is 15 points. The non-existent spread between Catholics and non is drawing a bunch of attention, but here is the real story. The only reason this is controversial is that a majority of men oppose it.

3. Catholics freak out about birth control because it prevents pregnancy, but most women use it for other reasons: 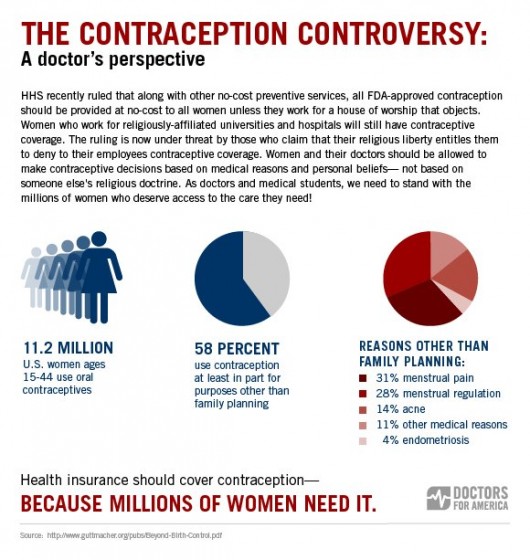 I’m sure every religious person will change their mind about the situation after being confronted with evidence. Right?

Previous postSantorum: Obama and secularism are the path to beheading religious people Next postBlogging makes a difference