My favorite thing to wake up to in the morning is white straight cis men insisting they get to decide who your allies are and that you should not ever get angry, but rather calmly explain basic topics to hostile questions from every person that wanders across your path as if it were your personal duty on this earth.

Thanks for that wonderful way to start the day, JT!

If that wasn’t his intended take home message from his post on Bria Crutchfield’s “outburst” at the Great Lakes Atheist Convention, that’s the message he actually accomplished. But intent is not magic – innocently writing something out of the goodness of your heart doesn’t wash away the problematic message of that post. Which ironically started with failing to understand that intent it not magic.

The problems all started when, during the Q&A of Mandisa Thomas’s talk, a woman asked her what black people were doing to fight black on black crime.  Was the woman’s question naive?  Yes.  Very.  And the naivety resulted in her asking a question that certainly had racist undertones, even if the woman was not intentionally being racist.  Mandisa handled it well.

But then, during the Q&A of Darrel C. Smith’s talk, Bria Crutchfield stood up and proceeded to give the woman an angry tongue lashing.  This went on for about five minutes (or maybe it just seemed like that long).  While Bria did answer the woman’s question, it was very embarrassing to the woman and trailed off into a number of red herrings such as “I’m here, get over it” as if anybody was suggesting that Bria or black atheists were unwelcome at the conference or silently sneered at by…anybody.

I, and several others wound up leaving the room during Bria’s monologue.  It just seemed so unnecessary to me.  The questioner was ignorant of what would make her question offensive, and this could’ve been solved without Bria embarrassing her (and herself) by usurping another speaker’s Q&A.  The woman merely needed information, not to be screamed at, and certainly not to be screamed at through a long diatribe in the middle of a conference when the floor was not hers.

So let’s recap what has happened so far:

JT’s psychic powers allow him to know that the woman asking the question on black on black crime is naive and not racist. This is despite that particular question being one of the most common, racist, debunked talking points from the far right. Even if 99% of the time that question is thrown out precisely to be hostile as a racism “gotcha”, we’re to assume this case is different for no good reason. He has downgraded the offense of that question to simply having “racist undertones,” despite playing up Bria’s response with value-laden terms like “outburst,” “angry tongue lashing,” “unnecessary,” and “diatribe.” His psychic powers also make him certain that Bria’s intent was to humiliate and embarrass, and he dismisses that Bria or other black atheists have any good reason to feel unwelcome at the conference. Because he gets to decide if they should feel unwelcome or not?

A commenter who also attended the event had a different take on the events:

Seeing that you stated that you left the room during Bria’s “outburst” I assume you did not hear her breakdown into tears at the end. I also assume that you were not present at the beginning of Bria’s talk where she apologized and clarified a few points.

If you would have witnessed the entirety of the “event” I don’t think you would have seen it as anything other than Bria’s frustration in having to educate people in a place that she hoped was already beyond that. It is often our “allies” that we get the most frustrated with, since for better or worse, we hold them to a higher standard because we hold them in higher regard.

After all this, JT has the gall to pull Bria aside and explain how he thinks she should have handled the situation – aka, be more nice and calm, and keep your disagreements to private discussions with the individual. This is so condescending it blows my mind. It is incredibly problematic for a white man to tell a black woman to not get angry about issues of racism that affect her on a daily basis. JT might not get mad, but it’s not because he’s achieved some higher, moral zen state that gives him infinite patience to deal with ignorance and hatred – it’s because these issues don’t fucking affect him. Of course you can stay calm when you either don’t care or don’t have to care.

He claims to understand how she feels – which is self evidently false from the article he just wrote. When you’re a member of a minority group, it is infuriating to hear the same offensive, dehumanizing, and ignorant questions over and over again. It is even more infuriating for people in a position of privilege to insist that it is your duty to personally and calmly educate every person that crosses your path. Even if 99% of the people asking these questions are assholes with no inkling to ever change their mind, you’re to treat each new one as a special snowflake. THIS one is just asking questions, guys!

Newsflash: If someone is parroting racist, sexist, or transphobic talking points, calmly explaining why they’re wrong doesn’t tend to work because they’re not looking to have their minds changed. You’d think someone who frequently deals with religious apologists would understand this. If someone came into an evolution conference saying “if we evolved from monkeys, why are there still monkeys?” would JT argue that they’re simply naive, not informed, and want an explanation? Or would he think they’re informed enough to be parroting a creationist talking point that’s, to steal the perfect phrase from Crommunist, “an ideological attack disguised as ‘just asking questions.'”

Insisting that minorities quell their anger is insisting that minorities stay silent. Asking for public ignorant statements to be responded to in private sweeps the problems under the rug. Observers hear the problematic statement but no response, which reinforces the status quo and sends a message that no one found that statement problematic. It also puts all of the burden of educating one person, who most of the time don’t actually want to be educated, on individuals who already feel drained and exhausted from having to explain the same basic 101 crap over and over again.

And this call for calmness and personal explanations is even more infuriating coming from JT. I have calmly and privately explained social justice issues to JT for years, over email, texts, phone calls, in person conversations. So has Greta. So has Crommunist, who points out the last time he did so he was ignored, so he’s not going to try again. And also feel like all of these attempts have been ignored because no progress at all has been made. So when a person I consider a friend doesn’t even listen to these calm private explanations, why is he insisting it will work on strangers? To quote Crommunist via twitter:

If the tone of voice someone uses is enough to make you discount their argument, then you didn’t care about the issue to begin with. And the repeated demand to have things ‘calmly’ explained to you simply means you’re looking for an excuse not to listen. This goes double for people who demand calm explanations, and then IGNORE those explanations when they are given. You. Just. Don’t. Care. And while it may make you feel good to SAY you care, your actions shine through the bullshit veneer of “but I want to learn!” So if you don’t care, at least be honest with yourself and with others. You don’t have to care about every issue, but don’t lie. It’s boring.

When I started college, I labeled myself as a feminist. Like, woo, equality, who wouldn’t be behind that?! I started to read feminist blogs and I disagreed with a lot, if not most, of what they were saying. It was incredibly tempting to spew forth my uneducated opinion, and that desire did not come from wanting someone to calmly explain it to me – it came from thinking I was right and they were wrong. I’m sure I did that occasionally because no one is perfect, but you know what I ultimately decided to do? I shut up and listened. I read more and more and attempted to educate myself before partaking in any discussions. And now after a lot of time and work and thought, I understand.

Do I fully understand? Of course not. It’s a never-ending process, but it begins with listening and educating yourself first. And I fully admit I am at different stages of this process for different topics. I grew up in an overwhelmingly white Midwestern suburb, so I haven’t been aware of a lot of racial issues until recently. But instead of parroting things I may have heard from older relatives, I’ve been listening intently to better myself. I also fully admit there are still some trans issues I don’t “get,” but my response to that is to keep reading and thinking about it. To subscribe to blogs that sometimes make me uncomfortable and challenge my ideas. To do some motherfucking Googling.

But this was the cherry on top from JT’s post:

Lately there’s been a lot of this attitude in the atheist movement, that every misstep out of naivety or ignorance, even if it’s insulting, makes someone a prime target for a shout down in a “public room” – as if humiliation and shame, while sometimes the proper tools, are always the proper tools.  When did we forget that people in the atheist movement are our friends and allies?

I must steal this response from Jadehawk: We didn’t forget. We realized it wasn’t true. 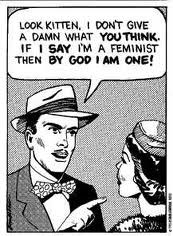 Just because you label yourself as an ally doesn’t make you one. Your actions make you one.  I want to close with one last quote from an article by Crommunist that’s a must read companion to this post:

Labels are accurate right up until the moment they are not. That is, you are an ally right up until the moment you stop acting like one, at which point you’re not an ally anymore. Having once been an ally doesn’t change your oppressive behaviour into non-oppressive behaviour any more than having had an accident-free record makes you not at fault for rear-ending that bus.

Being a good ally doesn’t involve silencing the people you claim to be allies with by policing their emotions and behavior.