And the Boobquake results are in!

Boobquake is finally over across the world. It’s time to crunch some numbers – did women dressing immodestly really increase earthquakes? Can we find any data that supports Hojatoleslam Kazem Sedighi’s hypothesis? 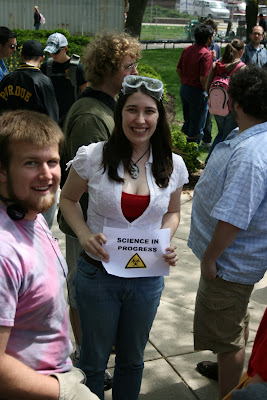 Photo by David Collins. Yes, that’s the biological hazard symbol. Yes, I found that funny. In case you didn’t notice, I’m a geek.

Many people seemed to misinterpret the planned analysis of this event. We’re not just trying to see if any earthquakes occurred, since dozens happen every day. What we want to see if we actually increased earthquakes in either number or severity. Let’s first look at the number of earthquakes that occurred on Monday, the 26th, and compare it to earthquakes in the past couple months. All data was taken from the USGS Earthquake website.
(click here for larger image) 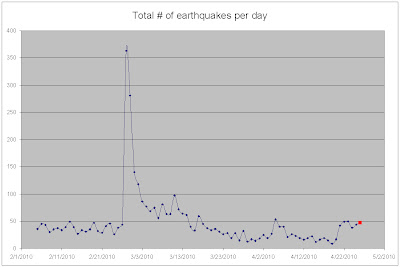 Each data point represents the total number of earthquakes per day going back to February 5th (the extent of the online database). Days are measured in Coordinated Universal Time. That red square is boobquake. As you can see qualitatively, our provocative dress didn’t really seem to affect the frequency of earthquakes. There were 47 earthquakes on the 26th, which falls well within the 95% confidence interval for number of earthquakes (about 0 to 148).

So did our cleavage/thighs/ankles/hair increase the number of earthquakes? No.

“But Jen!” the internet cried, “what about the 6.5 magnitude earthquake in Taiwan? Surely that shows our bosoms have supernatural powers!”

Sorry to be a buzzkill – hey, I’d like magical control over plate tectonics too – but that single earthquake wasn’t significant. Earthquakes between 6.0 and 6.9 magnitude happen, on average, 134 times a year. That means we had about a 37% probability of an earthquake of that magnitude happening on boobquake just due to chance alone – hardly an improbable event that needs to be attributed to an angry deity. 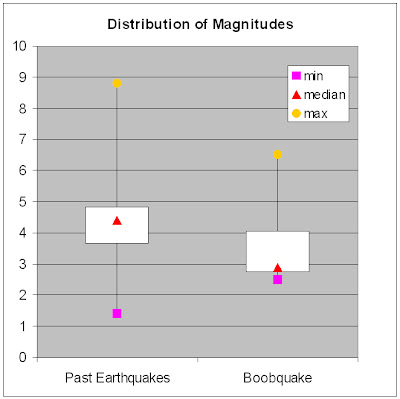 The box indicates the first and third quartiles (within which 50% of the data points fall). Not only did all of the earthquakes on boobquake fall within the normal range of magnitudes, but the mean magnitude actually decreased slightly!

Now, this change isn’t statistically significant, but it certainly doesn’t support the cleric’s claim. In fact, I think it develops an even more interesting alternative hypothesis: Maybe immodest women actually decrease the amount of earthquakes! Man, that would certainly be a fun way to provide disaster relief. Of course, before we can make any claims about that, we’d have to greatly increase our sample size. You know, I have this gut feeling that a lot of people would like to do our boobquake experiment again…

Obviously this study had its flaws. We didn’t have a large sample size, and we didn’t have a control planet where women were only wearing burkas. We didn’t have a good way to quantify how much we increased immodesty (what’s the unit of immodesty anyway? Intensity of red on blushing nuns?). Maybe women did dress immodestly, but we didn’t lead men astray enough. Maybe God really was pissed, but he couldn’t increase earthquakes for us because that would provide proof for his existence (or maybe it’s his existence that’s the problem).

Or of course, maybe God is just biding his time. If you hear a news report in the next couple weeks saying a bizarre Indiana earthquake killed a science blogger, well, then maybe we’ll have to rethink our conclusions a bit.

But you know what? Boobquake was originally intended to be a humorous exercise in scientific and skeptical thinking – that we should test claims people make, especially when they’re ridiculous. And what could be a better way to do that than to question the methods of boobquake itself? That’s why science is such a wonderful tool for investigation – research must not only go through rigorous peer review, but it also must be able to be overturned in light of new data. I think it’s awesome reading all the scientific flaws people keep noticing – feel free to keep pointing them out!

I’m pretty sure our results aren’t going to change Sedighi’s mind. People tend to find any way possible to justify their superstitious beliefs, no matter how illogical. I’m sure the next time a big quake hits we’ll get a “See? Told you so!” even if the event wasn’t statistically significant – he didn’t care about science before, and he probably won’t now. Even if he says that, I think boobquake succeeded. We exposed these beliefs for their ridiculous nature, encouraged people to think skeptically, and of course, had some fun. What else could someone ask for? (Less creepy misogynistic guys who miss the point? Yeeeaah, agreed.)

So, sorry Sedighi. To quote something that was floating around twitter – women can move mountains, but they don’t cause earthquakes.

Don’t forget that boobquake shirts are on sale here. All profits will be donated to the Red Cross and James Randi Educational Foundation.

EDIT: If you want a more scientific explanation of earthquakes and boobquake, there’s an excellent article here by Dr. Lawrence Braile, professor and earthquake expert at my own Purdue University.

Previous postAnd the boobquake experiment has begun... Next postBoobquake on the Colbert Report