My research part 4: How did microRNA convergently evolve?

How could microRNA have evolved to have such similar structure and function in plants and animals after evolving independently? You must be thinking, “What are the odds?!”

If evolution boiled down to nothing but random chance, the odds seem staggering indeed. No, I’m not about to say God guided evolution. What happens is there are certain traits about the system that constrain it to act in a certain way, making similar outcomes more likely.

To understand more fully, I have to teach you a little bit about microRNA biogenesis. Awww yeeeaaah! 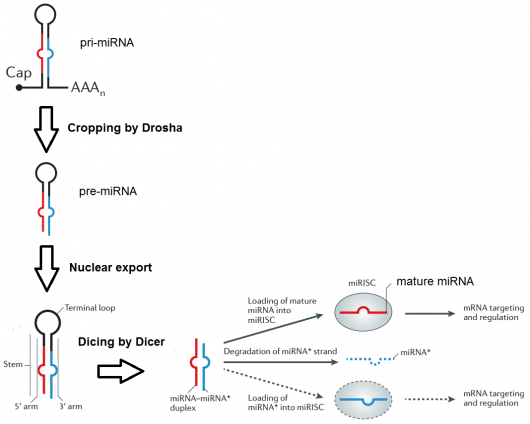 In animals, a microRNA gene is transcribed to make what’s called “primary microRNA.” This pri-microRNA forms a hairpin structure – that is, it folds over and complementarily base-pairs to itself, forming a step and loop. This pri-microRNA is trimmed by the protein Drosha and is then shipped out of the nucleus as an ~80 nucleotide precursor microRNA. In the cytoplasm, the protein Dicer cleaves the pre-microRNA to form the mature ~22 nucleotide microRNA, which will go on to be involved in gene regulation.

In plants, pri-microRNA still forms hairpins, but their size can be far more variable. Plants also lack Drosha – all of the processing is done by a Dicer homologue.

You’re probably thinking, “So they’re processed differently. This doesn’t really convince me of the odds.” But what’s important to notice is that both of these systems share a couple of key things, which make convergent evolution more likely:

I have only one thing left to say:

This is post 9 of 49 of Blogathon. Donate to the Secular Student Alliance here.