I was playing Cranium with my family, and as luck would have it, my team got an evolutionary question. My dad and grandma turned to me, since, you know, I’m an evolutionary biologist and stuff. This was the question: 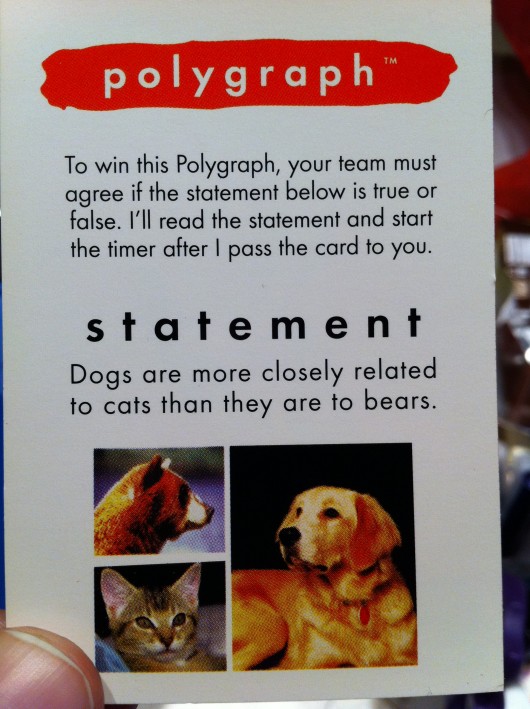 “True or False: Dogs are more closely related to cats than they are to bears.”

I knew it was false. I don’t have an evolutionary tree of every species in my head, but I had heard of this comparison before. People intuitively think dogs and cats are more closely related because they’ve both been domesticated – but that has nothing to do with evolution. I also knew this was an example of an evolutionary tree that had been tweaked as we gained more knowledge. Very preliminary, simple genetic studies shows dogs more closely related to cats. But as we expanded the comparison to the whole genome, we found that dogs were more related to bears.

I was very annoyed when I flipped the card to find this answer:

“True – The three species are all distantly related, but genetic evidence has established that bears split off from a common ancestor well before cats and dogs had their big split.”

My family immediately started giggling. “Good job, Miss PhD.” This would not stand. I flipped out the iPhone and searched for a modern phylogenetic tree of carnivores. I immediately found one in Nature Reviews Genetics based on karyotype data, indeed showing that dogs were more closely related to bears than cats.

I pointed at the image on my screen.

“Too bad” my family said, as they continued on with the next question.

It may no longer matter for the game (though my team did win – neener neener), but in case you’re interested… yes, dogs are more closely related to bears than cats. They’re all carnivores. Dogs and bears both belong to the suborder Caniformia, while cats are in suborder Feliformia.

So why was Cranium wrong, if it’s claiming its answer is based on genetic information? The answer lies in the date. I checked the box, and this edition of Cranium was made in 1998. In the rapidly expanding field of evolutionary genetics, that’s ancient. We can now compare whole genomes, while before we were limited to a single gene (at best). Different parts of the genome can evolve at different rates if they’re under selection (or not), so it’s important to look at the big picture instead of a tiny snippet. Our methods and technologies are improving, so our results get more and more accurate.