This story on NPR is great. An entomologist was browsing insect photos on Flickr when he saw one he didn’t recognize. After talking to his colleagues, they confirmed that this was probably a new species: 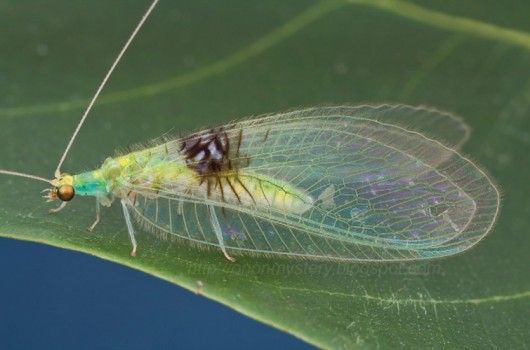 A full year later, Winterton received an email from the photographer; Guek had returned to the region of the original sighting and found another lacewing with the same wing pattern.

“He told me, ‘I’ve got one in a container on my kitchen table — what should I do with it?’ ” Winterton says.

The specimen was sent to Steve Brooks, an entomologist at the Natural History Museum in London. Brooks confirmed that the lacewing was new to science. He also found a matching specimen that had been sitting in the museum’s collection, unclassified, for decades.

The new species was dubbed Semachrysa jade — not after its pale green color, but after Winterton’s daughter.

It’s pretty awesome that we live in a time where information is spread so rapidly that a random photographer and a bored scientist browsing Flickr can make a new discovery. What other scientific discoveries do you think social media can contribute to?