Sometimes I feel like I just can’t win. On Saturday I received my car back from the cleaners, and it looked pristine and didn’t have a hint of mold smell in it. And it ended up costing less than my deductible, so I don’t know why I even bothered with State Farm other than to find out they’re massive assholes. But kudos to Mr. Detail for being very helpful and saving my car. And thanks to everyone who randomly made donations during my car crisis! Your acts of kindness cut the cost way down and I really appreciate it :)

Then on Sunday I had a door slam on my finger. Yaaaay.

I was closing my boyfriend’s outside door when a huge gust of wind came by and slammed the door shut. It pinched my finger and I yanked my hand out as reflex. Which was a poor choice, since that only succeeded in ripping a large chunk of skin right off the end of my finger.

Thankfully my boyfriend is the son of two doctors, so he threw 394271 types of disinfectants and bandages at me as I was sobbing and bleeding into his sink. The only highlight of the situation was when he said “These will definitely make you feel better” and appeared with Jesus novelty bandaids.

There was really nothing to stitch back together, so I just kept it under ice for the night. Went to the student health center this morning where they wrapped me up better than bandaids and noted that yep, I pretty much ripped my epidermis clean off the tip of my finger. Hurray. I bet it’ll leave a scar, right? I wonder if I’ll have a fingerprint there. 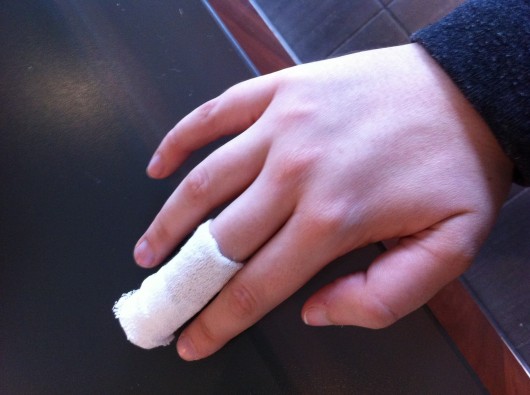 Thankfully it’s my middle finger so I can type with only minor inconvenience. Especially since my first committee meeting is tomorrow, so I’m going to spend the rest of the afternoon finishing my PowerPoint presentation. As long as I don’t accidentally flip off any of my committee members tomorrow…