Most likely thing to get me through Blogathon: 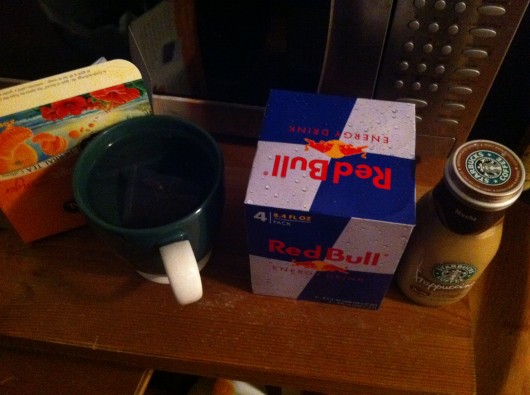 Right now I’m just working on the orange tangerine tea so I don’t peak early in the energy department. But that Red Bull, as disgusting as it is, will come in handy around 3am.

Most likely thing to sabotage Blogathon:

The fucking crow outside my window who won’t shut up. Hey crow, it’s 6am. I don’t need to hear your life story. I don’t care if someone is infringing upon your territory. Stfu.

Distracting boyfriend cuddles, since I’m typing away in his apartment. It was worth the risk since he’s also agreed to feed me all day. Of course, the risk of boyfriend cuddles won’t really be a problem until he actually wakes up, which will probably be around noon. Lucky jerk.

This is post 2 of 49 of Blogathon. Donate to the Secular Student Alliance here.

Previous postLet Blogathon begin! Next postOn blogging about my research