And now for the questions about atheism and blogging! 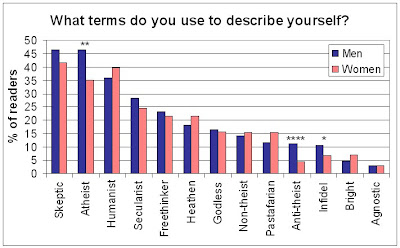 Last year men used the terms “skeptic,” “freethinker,” and “anti-theist” more often than women. This year “anti-theist” is still used more, but “skeptic” and “freethinker” are not significantly different. However, “atheist” and “infidel” were used less by women now. There’s a general trend of women avoiding terms that tend to have negative associations.

I’m intrigued by the changes in term usage since last year. All of the labels except “freethinker” were selected by a smaller percentage of readers this year. “Atheist” was hit particularly hard, dropping from 82% to 42%. The next biggest change was for “agnostic,” dropping from 23% to a measly 3%. I think the most likely explanation is that I’m attracting a much broader readership, while I originally started out predominantly as an atheist blog. 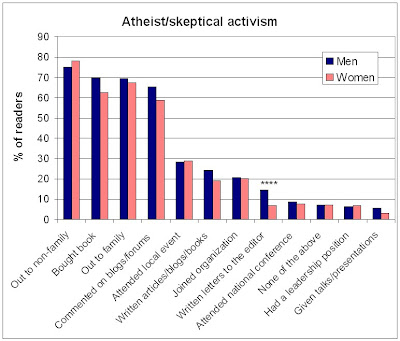 I’m not sure what I was expecting to find here, but I was just curious. Unsurprisingly, people are more likely to do activism that requires the littlest amount of time and effort – being out, buying a book, commenting on a blog.

I was a little surprised that the only gender difference was in writing letters to the editor (anyone have an explanation for that?). I guess from personal experience I expected women to participate less. Of course, there are two potential problems here. One, this doesn’t look at the frequency of these events – maybe they showed up to a single event or wrote a single blog post. Two, we have a biased sample – these are women who are already reading at least one atheist blog (mine), not women in general. 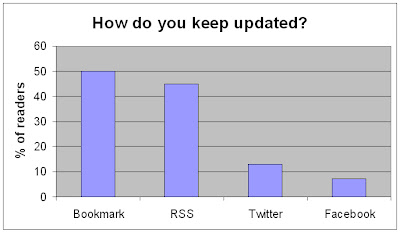 This one surprised me a bit. I thought everyone would keep updated about the blog using some sort of RSS reader, like Google Reader or Blogger Dashboard, mainly because that’s what I do. Apparently slightly more people manually check the blog through bookmarking or some other sort of link. I have 3,928 subscribers. Using this updating method data as an estimate, I probably have approximately 8,000 readers. Wow! Not to shabby for a 2 year old blog.

Twitter and Facebook are rarely used on their own, but rather in addition to another method. Though you can see a slight difference when seeing how much people comment: 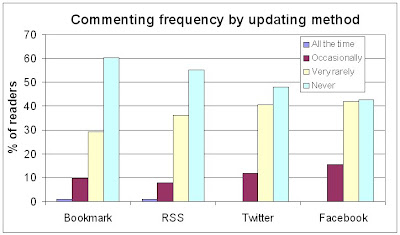 It seems that people who use Twitter and Facebook, either alone or in addition to bookmarks or RSS feeds, are more likely to comment. Maybe they use those things because they’re more socially interactive online in general?

But overall, a very small percentage of my readers make up the vast majority of the comments. Hello, all of you lurkers out there! Though an interesting trend is seen when you break it up by gender: 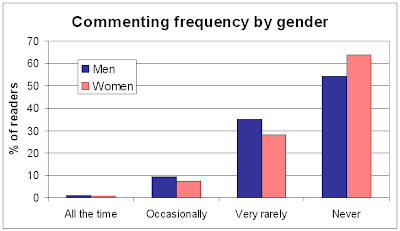 Ladies! Why aren’t you commenting as much?! No wonder blogs can look so male dominated. Seriously though, why are women less likely to comment? Are we less inclined to speak up thanks to social conditioning? Is there something about the environment in the comments that make them seem unwelcoming? If you’re a lurker (lady or otherwise), please let me know. I’m generally curious, but I also want to make sure my blog is a place where you can feel comfortable. 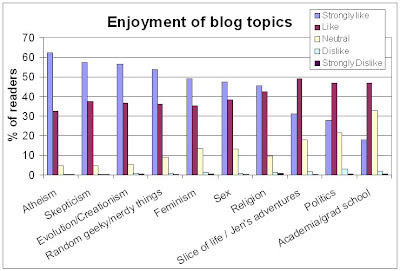 I guess a 5 point Likert scale wasn’t the best way to ask this question, since if you stick around to read Blag Hag, you probably like most of the topics. Although, after reading these practical tips for writing likert scale questions, I’m questioning if I just needed to use better questions. Oh well. I should check to see if non-US readers are the most apathetic about politics, and if everyone but graduate students are apathetic about my grad school posts, haha. Other than that, I didn’t get too much out of this question. Going to keep doin’ what I’ve been doing.

The only topic that differed between the sexes was Feminism: 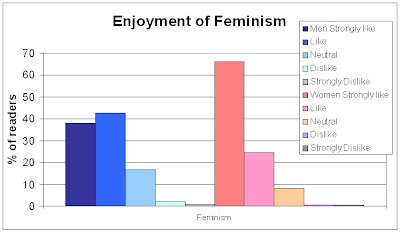 Women readers really like when I talk about feminism. Shocking, I know. Thankfully my male readers still generally like it! …Of course, I’ve probably scared off all the dudes who can’t stand it. Hm. 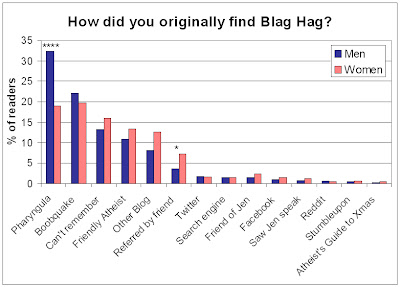 A couple interesting things on how people found my blog:

I still haven’t even attempted to look at how location or past religious beliefs correlates with anything… If you have something you’d like to investigate, let me know. But before that, I’ll look at some of the comments you guys left in the free response, since even I can get sick of making graphs.

Like always, feel free to discuss in the comments.

Previous postBlag Hag 2011 Census Results Pt. 1 Next postThat's all you got, Ken Ham?