My visit to the "Ground Zero Mosque"

I’ve been doing a lot of sight seeing in New York, and one of the places I stopped by is Ground Zero. I felt compelled to visit it, like it was some sort of patriotic duty as an American. There’s really not much to see, especially since all of the area is surrounded by a fence advertising the 9/11 memorial that’s going to be built where the two towers used to stand. It is pretty amazing how large the area is, and how it’s still pretty much just a large hole filled with cranes – I thought it would be more far along after 9 years.
While I was in the area, I decided to stop by the controversial “Ground Zero Mosque.” I use quotes because 1. It’s not a mosque, it’s a Muslim community center that will include (amongst many other things) an area for prayer, and 2. It’s not exactly near Ground Zero. We had to walk a couple blocks to get there, and then down a quiet side street. It by no means feels like it’s on top of Ground Zero.
We recognized the building because there were people with signs outside. I was ready for some anti-Muslim xenophobic protests, but I was pleasantly surprised: 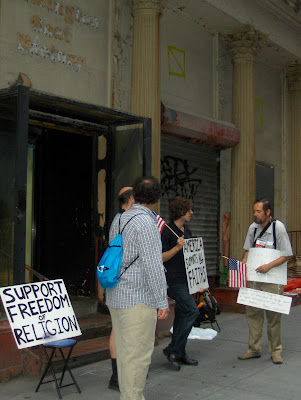 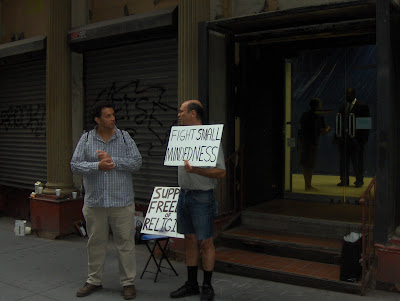 All of the people there were supporters of Park51 and had signs about freedom of religion. I was definitely pleasantly surprised. There were some chalkings as well: 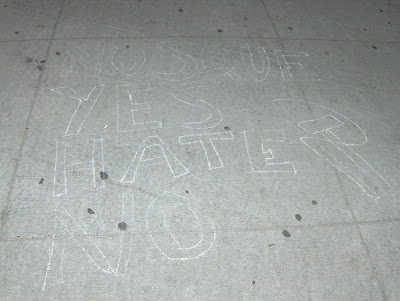 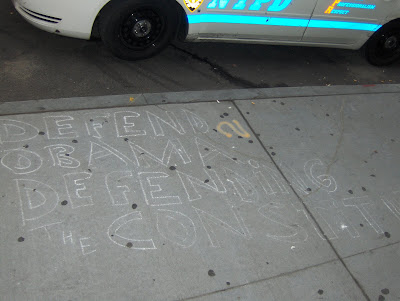 The guy with the goatee let us know that friends were welcome to dinner at 8pm, regardless if they were Muslim or not. Though he did say women would eat in a separate room, and after a quick glance at my outfit, confirmed that I was modestly dressed enough to come. We already had plans, but it was a nice offer. 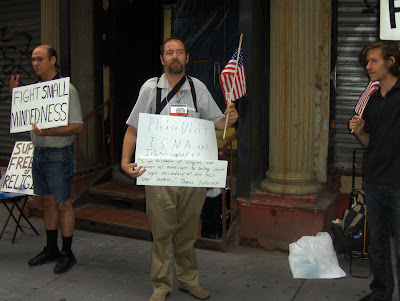 It was great to know other people haven’t gone totally insane in this country. I may be an atheist, but I totally support freedom of religion. Even if Park51 was nothing more than a mosque, and even if it was right next to Ground Zero, I would still defend their right to build it there. 9/11 may have been caused by Muslim religious extremists, but it wasn’t representative of all Muslims. We have to remember that people of all religious beliefs, including Muslims, died in 9/11, either as victims who were in the towers or responders who were trying to save lives.

Previous postLiving in "special" states Next postFound this oddity in SoHo