My brother Pat and brother-in-law Danny’s barbecue team, Brew-B-Q, is competing in the 23rd annual Jack Daniel’s World Championship Invitational Barbecue this weekend. I wish them the best of luck, though I know from experience that their stuff is delicious. I think this is the first time I ever wished I was in Tennessee.

And if you ever wondered if self-deprecation runs in the McCreight family, here’s your answer from an interview their local paper did:

McCreight and Peters made the drawing after winning a Wisconsin state title at the Kenosha Grill Games in August.

“If you’re really good, which we’re not, you can automatically qualify for the Jack by winning seven state championships during the season,” McCreight said. “Each year, there are a handful of teams that do so.”

I also have a special interest in the team, since I drew their logo back in 2008: 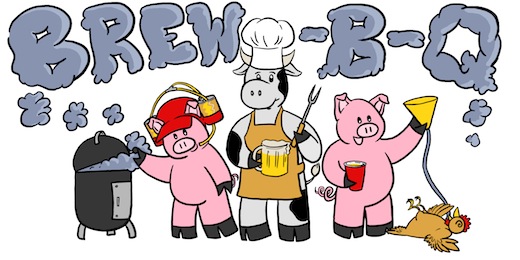 Previous postHappy End of the World! Next postI have eaten the best beef brisket in the world