The Amaz!ng Meeting was, well, amazing. It can be succinctly summarized as a four day long skeptical orgasm. …And by that I mean an orgasm due to geeking out about skepticism, not that you’re skeptical of your orgasm. Because the latter wouldn’t be that amazing.

There is so much to talk about that I’m going to have to break it down into different topics. And since I’m currently getting tagged in dozens of facebook photos and squeeing over their contents, I figured I’d start with a nice fangirling post. Skeptical celebrities, woo! I’ll blog about the actual talks and other various observations later today.

When I arrived at the conference, I was amazed at how many people I already knew. I guess I never realized how much networking I did while president of the Society of Non-Theists – I could hardly walk through the hallway without seeing a familiar face. But I’m the type of person who’s really shy around strangers – I have a hard time initiating conversation with someone, especially if they’re famous. I pretty much immediately saw James Randi and Phil Plait of Bad Astronomy, but ran away due to fear. While I was running away in fear Richard Dawkins walked right by me. For some reason my reaction was not to flail or faint or pee my pants – instead I blushed like crazy. Yep, geek-crushing on Dawkins.

At the opening reception, I ran into my friend Ashley Paramore (fellow Secular Student Alliance board member and videoblogger healthyaddict), who is about a million times more social than me. Actually, this is probably an understatement. She proceeded to take me around and introduce me to people, and helped me work up the nerve to go take a photo with Adam Savage of Mythbusters fame. 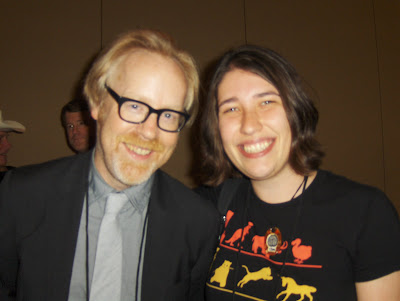 I actually had to go back and take a second photo (the one above) because my camera is being held together by duct tape and fell apart before the photo could save. Thankfully Adam was nice enough to do another.

I was standing a couple feet away, just having been introduced to Jamy Ian Swiss by Ashley, when I hear “Jeeeeeeeeeeeen!” and get surprised hugged by Phil Plait! 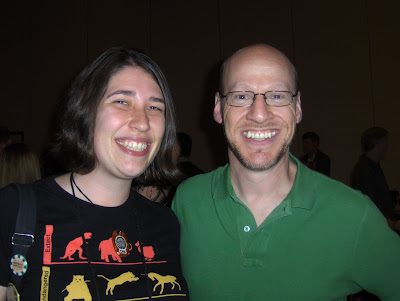 Having someone I was avoiding out of shyness run up and hug me seriously made me feel so much better for the rest of the conference. I cannot stress how freaking nice Phil is. I constantly ran into him throughout the conference, and he always said hi and started chatting with me.

And he wasn’t the only skeptical celebrity to seek me out. Right after I saw Phil I was approached by Jennifer Michael Hecht, author of Doubt: A History. 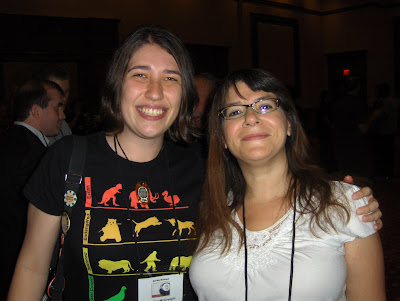 I knew boobquake was a media sensation (hopefully I knew that since that’s what my talk was about), but it still never dawned on me that so many people would know me. It was just so strange having people I admire approach me, knowing who I am and wanting to say hello or get a photo. And it was just as bizarrely awesome meeting so many readers and boobquake fans. I had to very quickly get used to the following exchange:

Eventually my friends would just stand by me going “You know she’s the boobquake girl, right?” This was actually somewhat helpful, since I didn’t really want to introduce myself to famous people this way, haha.

After the reception I was hanging out in the hallway with Ashley, slightly zoning out due to sleep deprivation. Hemant was going to be playing in a TAM poker tournament, and I had said I would go watch him for a while. All of a sudden she’s tugging on my arm and running.

Ashley: We need to go now.
Me: What? What happened?
Ashley: Jamy just invited us to dinner with Adam Savage.
Me: What.

Sorry Hemant, you got beaten out by Adam Savage.

Suddenly I’m speedwalking through the casino with Jamy Ian Swiss and Banachek talking about boobquake. The restaurant ended up being full so we decided on liquid fuel instead, and headed upstairs to a somewhat secluded margarita bar. We wait a little bit before Adam Savage and Phil Plait get there, and Adam sits right across from me.

Eventually Adam had to go, so got to talk with Phil a lot. I don’t remember if it was this night or another (yes, that’s how much I talked with him), but he asked me if I was still blogging after boobquake. I told him that I try to make at least a post a day, and he was surprised. Apparently he subscribed to my blog’s feed but it never worked. The fact that Phil Plait has been attempting to read my blog since April and failing because of a technical problem is seriously not acceptable. Damn you, Google Reader. I sent him a link to the correct feed, so hopefully that helps.

The little private party started to die, so I went back down to join Skeptics in the Pub at the Silverado Lounge. My friends kind of hated me that I had snuck off with drinks with Adam without telling them (sorry, I was sworn to secrecy!).

Me: I think the only person left that I really want to get a photo with is Richard Dawkins.
Julie: Well, he’s right behind you.
Me: What. 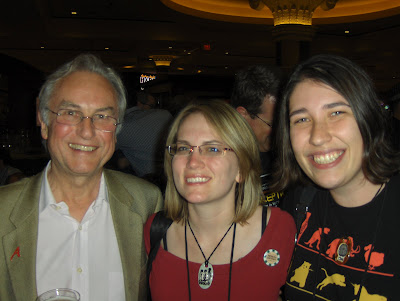 Richard Dawkins was about two feet behind me having a beer and I didn’t even notice. I went up and asked for a photo (the one from this post) and he politely agreed. Before he could escape I mentioned that we were going to be published together, and he suddenly became a lot more interested and friendly. I explained how the publishers for the Atheist’s Guide to Christmas were creating a US edition and wanted to add some American authors (which he didn’t know about), and that I was one of them. He asked what my piece was about, and I explained how it was a satire about atheist Christmas toys based on my Atheist Barbie drawing.

He asked a little more about me, so the talk turned to how I’d be starting my PhD and that I study genetics and evolution. I got to geek out about my undergraduate research for a bit since he was actually interested. Ashley then mentioned that I was also the creator of boobquake, and he remarked how he thought it was a wonderful idea, except that he didn’t like the word “boob.” Remember when I was wondering if a commenter on the boobquake post really was Richard Dawkins or not? Yep, it was him. Richard Dawkins has commented on my blog. Gah. I gave him a card to my blog and he happily accepted it, and we got one more photo.

I still can’t believe that I got to speak to Richard Dawkins for that long, and that he seemed so genuinely interested. I’m still on a fangirl high because of it. Oh, and since the guy with my camera screwed up at first, I now have a silly photo of all of our crotches: 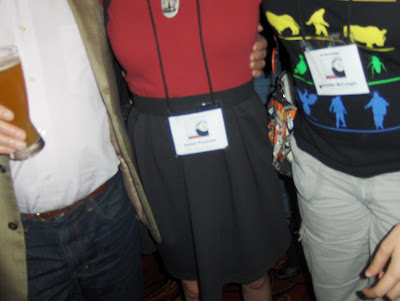 I also met Michael Shermer and Brian Dunning right after that, but didn’t get a chance to snap any photos. Then I went to go retrieve Hemant as he lost at poker (though he made it really far!) and convince him to go to Skeptics in the Tub. He complained about how much he hated water despite the fact that he went and put on swim trunks and sat in the hot tub for a couple hours. Yeah, he really hates water. I also prodded Phil into coming. So yeah, I was hanging out in a hot tub with Hemant and Phil. Again, can’t make this stuff up. 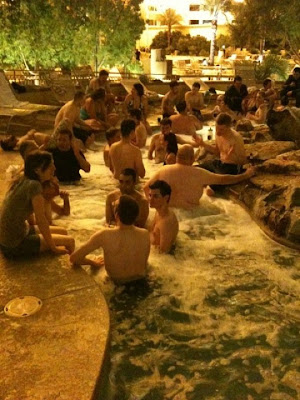 Eventually I went and crashed. All of this happened on just Thursday night. Fangirling about the rest of the conference will be up soon.