by Jen on May 8, 2011 • 11:27 am 11 Comments
I had a blast at the Imagine No Religion conference in Kamloops, BC. The organizers did a fabulous job, especially considering it was the first time this area tried to organize a conference. There were over a hundred attendees and the talks were very high quality. I was particularly moved by Nate Phelps‘s talk about what it was like growing up in the Westboro Baptist Church, how hard it was to leave, and how it affected the rest of his life. Absolutely stunning – you could have heard a pin drop.
Thankfully there were some funny talks in the afternoon, since the WBC is alwa
ys a bit of a downer. Brian Dalton (aka, Mr. Deity) had a fun presentation about his show (which I love) and being a Formon (Former Mormon), and PZ Myers gave a great talk about the benefits of laughing off religious craziness. More impressively, he didn’t get lynched for starting his talk near the end of the Canucks hockey game. Though not everyone was totally attentive… I guessed some people were probably busy making alterations to their fantasy hockey teams so they could maximize their returns, I can’t be sure though. 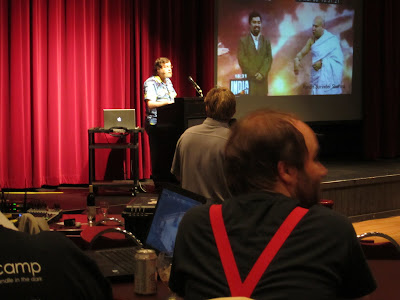 It’s still a little surreal being a speaker at these conferences. It’s odd having people want to get a photo with me or have them sign their shirt, when I’m still squeeing over getting to have dinner with PZ and Mr. Deity. You’re fangirling over a fangirl! 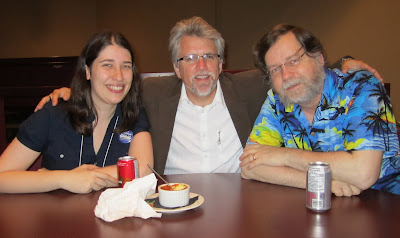 But it’s still pretty awesome, and I’m so thankful for all the people who approached me after my talk to share some kind words. I had a hard time even refilling my coffee or going to the bathroom because I was stopped so much, haha.

Thanks for the great conference!