I found Hemant again, who was just outside the room, and we decided that we wanted to try to go see the “Ultimate Proof of Creation” presentation that was supposed to start in about fifteen minutes. Because of that I didn’t really pay much attention to the last bit of the exhibit, since we were trying to hurry. A guard with a dog popped around the corner (trying to sniff out the brown people, we said). My friends (who had abandoned me at the antibiotics display) pulled me aside to point out one last bit of hilarity, which I got on video. Mark is Jewish (well, and an atheist, you know how that works) and had a bone to pick about some of the museum’s Hebrew:

Apparently it’s a little more complicated than that, and Mark has a more in depth explanation at the end of his post about the Creation Museum. There are also people at Pharyngula saying all of the other languages are messed up, too. Good quality control, Ken Ham!

You pop out into the gift store (how strategic) but I didn’t look around much because we wanted to get in line – a giant freaking line. Hemant and I knew we probably weren’t going to get in, but we felt obligated as bloggers to try, especially since PZ was even farther behind us. We snaked around the museum and saw some random nice exhibits about different gem stones and rocks and fossils, and I just enjoyed them without reading the signs telling me they were only thousands of years old. Then the entrance to the theater was in sight, but they closed the doors with only about 25 people in front of us…so no Ultimate Proof of Creation for us. I’m sure I would have converted if only I had seen it.

Having failed, my group of friends went to eat in Noah’s Cafe. I brought a bagged lunch because I couldn’t bare to spend a penny more on the place. The napkin holders here had this delightful advertisement for some sort of toy/game/thing: 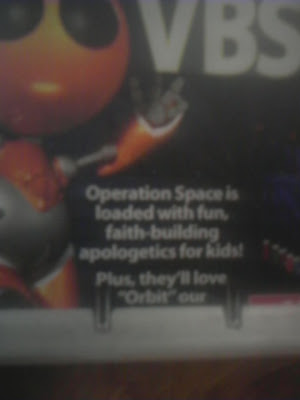 Apologetics for kids. Barf. I almost lost my lunch.

After lunch I wanted to go check out the petting zoo with some people in the group. On the way out, we happened to walk by right when the only incident of the trip happened. PZ has the full story at his blog – the part I saw was Derek getting a stern talking to by a Creation Museum staff member. I agree that Derek was being peaceful and really just trying to defend himself from this guy accusing him of doing bad things. There was another guy who was shooting film for a documentary the entire trip, and he tried to film their discussion. When they asked him to stop and he didn’t, they asked him to leave and he peacefully did. That’s all. I was going to stick around, but then I saw Pastor Tom again (still lurking around the entrance!) so we decided to leave and go to the petting zoo.

The petting zoo was alright. It made me sad because I knew the whole point they had one was yet another reason to attract kids. What little kids don’t like a petting zoo? Hell, I was flailing gleefully about going there. It was pretty typical except for two animals. One, they had a camel: 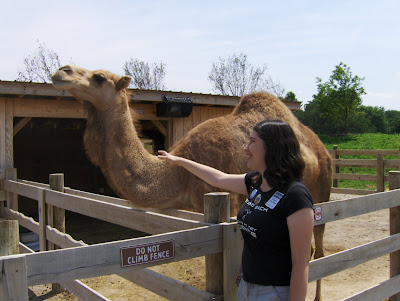 And two, they had a Zorse: 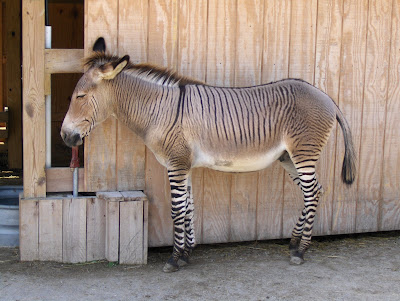 Wtf is a Zorse, you ask? Apparently it’s a cross between a Zebra and a Horse – and yes, this isn’t just another lie from the Creation Museum, they have a Wikipedia article that confirms their existence. Why the hell did they have a Zorse, you ask? Well, it’s supposed to be proof of their “Kinds” idea I talked about earlier. They claimed that Horses and Zebras aren’t really different species because they can breed, which is utter bull crap for multiple reasons. Now what defines a species is a complicated topic in biology, but they violate even the most basic of definitions, so let’s just go with that right now.

“A common definition [for a species] is that of a group of organisms capable of interbreeding and producing fertile offspring, and separated from other such groups with which interbreeding does not (normally) happen.”

I instantly guessed that Zorses were sterile, but the keeper was busy talking to someone else, so I didn’t ask. But yep, they are. When two species mate and produce a sterile hybrid, that’s means that they’re two different species. Also, Zorses do not occur naturally in the wild, which is a major part of the definition. They only occur when humans forcibly breed a Horse and a Zebra – this is an example of interbreeding not normally happening. Often times the barrier between reproduction isn’t so much incompatible sperm and eggs, but incompatible behavior. Honestly, the whole species concept thing is so much more complicated than that, but it’s annoying how the Creation Museum just lies about it (again).

At this point Mark called me to tell me to come join him and Hemant again (they were busy in the gift shop instead of the petting zoo). When we got back they were following a crowd of atheists including PZ, and not wanting to miss any potential excitement, I followed. It was during this time where three older atheists in the group informed me that they had been watching the parking lot, and that security guards were going around photographing the license plates of all the cars with liberal bumper stickers. That almost certainly included mine since I have a Darwin Fish, an Obama sticker, and a Republicans for Voldemort sticker (though they may not have understood that last one). I didn’t see it myself, but I don’t see why they’d lie about it. Not quite sure if anything will come out of that, who knows.

We went outside the gates, and that’s where PZ underwent a debaptism by Edwin Kagin (legal director for American Atheists) and was then made a Kentucky Colonel! Good thing I tagged along! 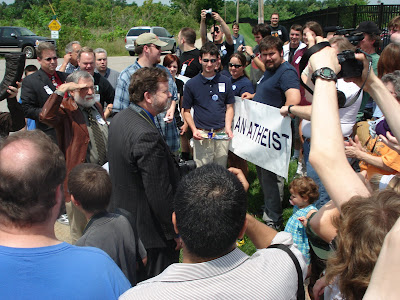 After that, a lot of people started to go home. I could have gone back and poked around the gift shop and probably found tons more to laugh and cry about, but by that point I had had enough. In the parking lot I formally introduced myself to PZ (“the crazy person who drew that cartoon”) and got a photo before heading home:

All of the Creation Museum staff and guards were very nice (even with the tasers and glocks and dogs…). I was oddly surprised that they never really talked about Jesus, but I guess they were focused on Creation, not really modern Christianity. Honestly, typing this up and thinking about everything with a clear mind was more horrible than walking through the museum. When I was there I treated it like Disneyland – all fantasy, nothing true, just something to giggle about. But now that I can take a step back and think about it, it depresses and horrifies me. These people are blatantly anti-science and anti-reason, and their sole purpose is to brainwash children (well, and to make money). The Creation Museum was literally mind numbingly stupid: it took nearly two hours of philosophical and scientific discussion in the car ride to Columbus until I could form grammatically correct sentences again.

Hopefully my recount of the trip was detailed enough that you guys won’t feel the need to go there and suffer through it. However, I am glad I went. People were criticizing our decision, but I think hearing about this craziness is just what people need. This isn’t just some private belief system. These people are out to convert, to warp the minds of children, to slander scientists and spread lies about the world, to instill archaic morals into the minds of many. These religious extremists may be a minority, but they are a vocal minority. We need to step up, be activist atheists, and keep working hard to make sure this rubbish doesn’t get spread around anymore.

And that was an incredibly depressing ending. Here, have a photo of us before we went in, back before we had died a little inside: 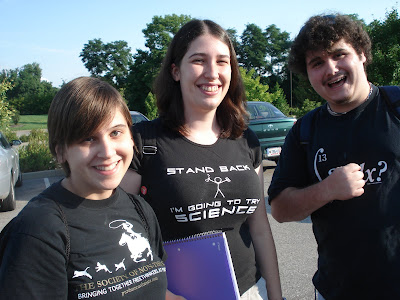