I’ve been dreading to write about this part of the Creation Museum trip because I know it will put me into a frothing rage all over again. But being a biologist, this is the part I should talk about the most. I’ll try to keep Caps lock and exclamation points to a minimum.

When I saw this sign, I went straight into the room: 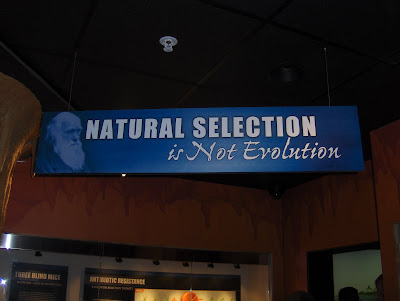 The whole theme of this part of the museum is that they accept natural selection and microevolution, but not macroevolution. Which makes no sense whatsoever, since microevolution over time leads to macroevolution. Actually, I hate those stupid terms anyway. Evolution is evolution, whether it’s a change in a trait or a change of a species – it’s just the change of genetic material from one generation to another. Since their stance makes absolutely no sense, they deal with it by repeating over and over again that things “are not evolution” even when they just perfectly described evolution happening.

They also never really talk about species, either. Instead there are just “Kinds.” 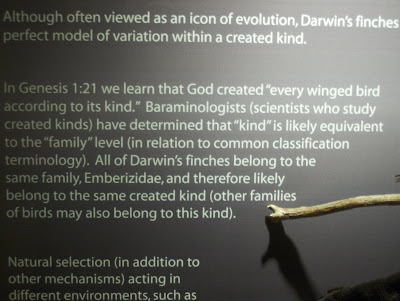 Their basic idea is that Noah took a certain “Kind” on the Ark, and then that differentiated after the flood. Horrifyingly enough, they have a made up word for creationists who waste their time studying “Kinds”: Baraminologists. Just because you can stick “ologist” at the end of a word doesn’t make it scientific. Here’s an example of “Kinds”: 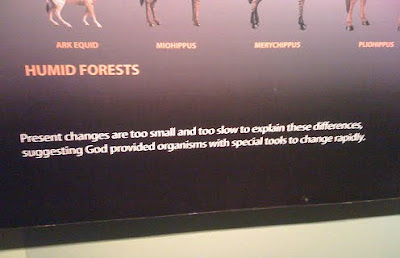 Noah took a small proto-horse, and that eventually evolved – sorry, gradually changed through time (wtf?) into modern horses, zebras, mules, etc. All the proto-animals Noah took were smaller than their modern day counter parts because that’s how they could fit on the boat (wtf?!). Their main argument is that all living equines aren’t really different species, because that would imply evolution. I don’t know why they even bother with all the microevolution stuff, because it just complicates their argument. Why not say Noah took two horses and two mules and two zebras on and they didn’t evolve at all? Why start redefining species and messing with all this “Kind” stuff?

The other thing they beat over your head is that God put so much genetic diversity into the animals Noah took onto the Ark, that once the flood was over, they were able to differentiate. Any geneticist can tell you this is pretty much impossible. Noah forced every single living creature into an extreme bottleneck of two individuals that would eliminate virtually all genetic variation present. Think of it this way: at a single gene locus, if both individuals were heterozygous, the maximum number of alleles you could have in the population would initially be 4. That is not a lot of diversity, and certainly not enough diversity to produce different “species” or whatever the hell they call them. And most likely, not every animal would be heterozygous, or they’d both share alleles that were common in the population. Have the people at the Creation Museum never heard of the Founder effect? It would take insane rates of mutation to make up for this, but they don’t claim that happened – they just say God filled the creatures with variation, which shows that they have absolutely no understanding of genetics.

Oh, but they did provide an answer to one of my favorite questions about the flood! How did the animals redisperse across the world once the flood was over and the Ark landed? It’s simple! 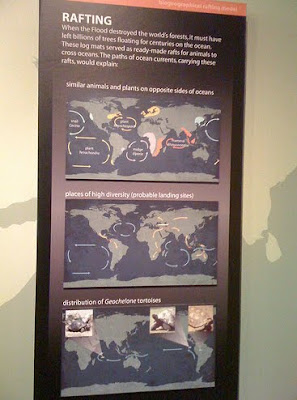 Yes, they really do claim that uprooted trees floated in all the oceans, and animals walked across these trees to get to the other side.

Let that sink in for a moment.

I really don’t understand how these people can NOT see how ridiculous this sounds. Have they ever tried to walk across floating logs before? How would a fucking mastodon walk on logs across an ocean? How many days would that take to get across, where the animals wouldn’t have food or would have to sleep on makeshift rafts without drowning. Keep in mind there are only TWO of each animal at this point. Better hope both of them make it! That must have been what happened to the unicorns.

On that note, how the hell did any of the plants survive? I’m pretty sure the vast majority of plants couldn’t survive being under salt water for months, dealing with whole continents moving and mountains being formed, all the soil be moved around so they’re ripped out, or having miles of soil being deposited on top of their seeds (if they even have them). Hell, most plants die if you water them too much! Even if only a couple plants died, it would cause huge complications since ecosystems are so interconnected. Or what about plants that needs specific animals or pollinators to survive? How do they know if that animal is going to end up in the same place since the animals now have to move all over the world? What if a plant that likes growing in a valley ends up on top of a mountain? IT DOESN’T MAKE ANY SENSE AT ALL!

Ok, back to the Creation Museum raping genetics: 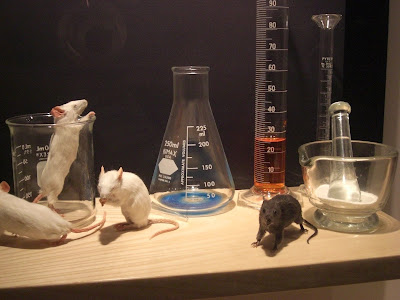 The whole point of this case was to say that all mutations are negative (mice with mutations are blind, sick, blah blah blah). They claimed no mutations are ever neutral or positive or produce anything new, which is an outright lie that has been debunked over and over again. It’s one thing to fabricate stories, but it’s another to try and use science and utterly fail. It just drives me mad that this stops being about religious beliefs and starts being about demonizing science. No where in the Bible does it say “all mutations are negative.” They can’t go around asserting that this is their opinion (not that opinions are sacred, but you know what I mean). They are just making shit up to discredit scientists and to promote their own cause. Another example: 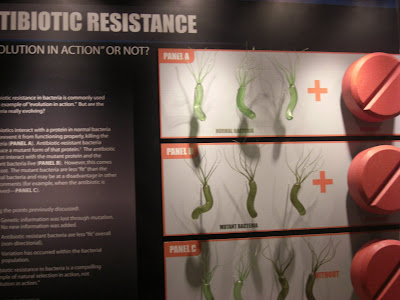 I probably stood in front of this case for 15 minutes. First, I had no idea what it was trying to say. Second, the museum was making me feel so confused and stupid that I actually had a hard time reading full sentences to understand it. Third, once I understood what it was saying, I was so flabbergasted that I just stared at it with my jaw hanging open. The whole diorama isn’t there, so let me summarize for you:

Alright, still with you there.

The whole premise is that since there are ONLY negative mutations (aka, something destroying a receptor that an antibiotic targets), that without antibiotics present, mutant bacteria are less fit. This again is a downright lie. Proof? How about all the people who are infected with mutant, antibiotic resistant bacteria BEFORE they take any antibiotics? Those resistant bacteria seem to be doing just fine! There, in two seconds I debunked their entire display.

I still couldn’t stop staring at it though, because it angered me so much. Hemant finally appeared and gave me a hug, and after talking to him a bit I still stayed and stared at the stupid thing. Then PZ came through the entrance with Ashley (healthyaddict) who was videotaping this exchange, so I hope it goes up (with more accurate quotes):

PZ: *sees me staring forlornly at the thing* Hmm, so what’s this?
Me: *explains what I just said above*
PZ: …What.
Me: Yep.
PZ: That doesn’t make any sense.
Me: Have you seen the rest of this room?
PZ: …No.
Me: Have fun.

At that point I had to pry myself away or I was going to start crying.

(Thanks to Vanessa and Josh and robsterFDCD3 for extra photos)