Never fear, Creation Museum goer. After going through terrifying Atheistland, you enter a serene black tunnel dotted with Christmas lights – er, stars, I mean stars. You pop into a mini theater where they’re showing a video about how God created the universe in 6 days. I have to admit, this is where the museum starts being educational – in the sense that I learned about a literal interpretation of the Bible. I was not raised Christian, nor have I read the Bible other that some select passages (which I feel guilty about, I mean to do it soon). I couldn’t tell you what order God created things, or exactly what happened to Adam and Eve and their children, so this was pretty informative from a Bible as Literature point of view (if you ignore all the dinosaurs). Past that, absolutely hilarious. My favorite part of the movie was Adam and Eve watching brontosauruses as the sun sets: 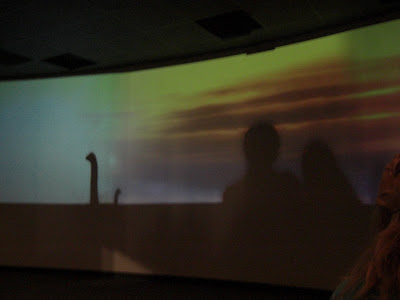 You pop out into a room showing various videos playing on loop. The first one I watched gave the same old “DNA is information, information can’t randomly come about, therefore there is a God” argument. It then took a random word (don’t remember what it was) and started rearranging it Text Twist style, this somehow being the best argument against evolution. Uh, what? Then a clip about irreducible complexity in the eye came on, and I got upset. I went on a mini rant to a friend about how stupid that argument is, and how octopuses have better eyes than vertebrates anyway…but then I had to stop watching or I probably would have started yelling at the screen. Then I found this brain breaking sign: 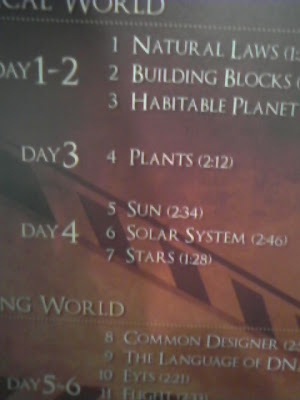 This is where my brain officially broke during the trip, and I really felt like a part of me had died from the mind boggling ignorance. Let me take a big breath and swig of beer before I touch this one.

Let me break this down for you, in case it’s not jumping out from that image. First came plants. Then came the sun. Then came DNA. See anything a little odd about that order? When I first tweeted my distress, I said “But…but…photosynthesis!” I’ll admit that’s not the best response. Theoretically plants can live a day without sunlight (since we are talking about 24 hour days here), and it may just be silly rather than impossible for God to make plants first. But the sun doesn’t just produce sunlight – it produces warmth. There’s no way plants could survive in the freezing cold of space for 24 hours – most of them have a hard enough time when the first frost comes. Of course, this is God we’re talking about – I’m sure a creationist would wave their hands and say God protected the plants from dying with his magical powers, and that’s that.

And then there’s the little bit about DNA. How the hell did plants exist before the building blocks of life? Are you telling me that every plant cell’s nucleus was empty, that not a single protein was made in 24 hours, that plants sat in suspended animation for 24 hours before God zapped DNA (and supposedly RNA) into every plant cell on Earth? Really? Does it make any sense for an all knowing God to create things in such an illogical, silly order? Or does it sound like the creation story is a myth made up by people who know nothing about biology or evolution, and now they’re desperately trying to apply it to the story?

Brain broken, I decided to go take solace in Eden: 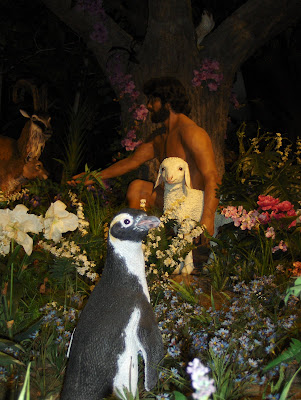 Wait, what the freaking hell? What are penguins doing in the Middle East?! You think with all the dinosaurs, I would be desensitizes by now…but no. Dinosaurs existing with humans is pure fantasy, penguins in the middle east put me in an Ecologist Rage. But then I got a photo with a cute dinos and all was well: 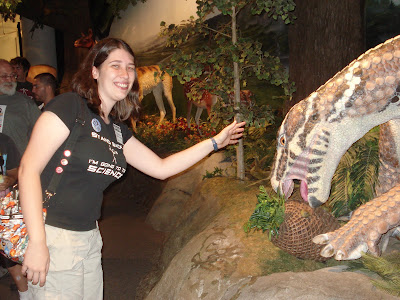 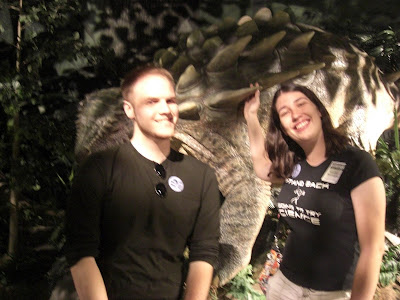 Not so sure if I was allowed to touch that. Whoops.

I think I’d like to take the time here to actually compliment the Creation Museum on one thing: it was extremely well made. Nothing looked cheap, all of the fake dinosaurs and humans were excellently made, and all of the signs had very nice designs. Of course, all of this makes me even more sad, because people are easily swayed by snazzy, professional looking things.

Moving on, we reach the bow chicka wow wow part of the garden. Well, I guess technically not yet, since there’s no sin yet. I have to admit, Adam was kind of attractive, and some of these dioramas with Adam and Eve were oddly suggestive. I mean, what a romantic location: 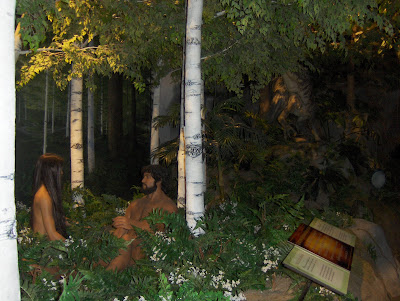 …with a velociraptor in the background. Can you spot it? 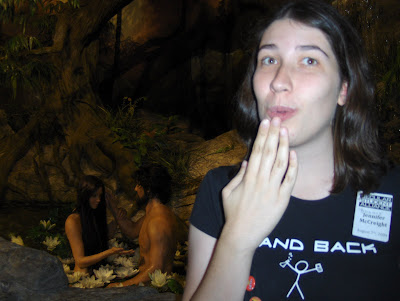 Oh my! Naughty Adam and Eve! Keep those hands above the water, Children of God with Strategically Placed Hair! Oh, and in case it’s been too long since the museum made a political/cultural statement, here you go: 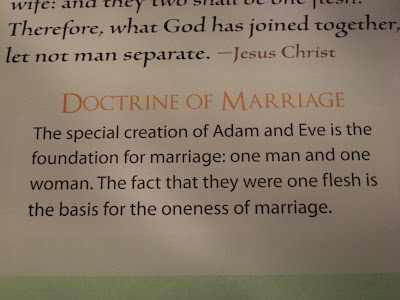 Oh, well that’s good to know! Since we have a separation of church and state here, and they claim the only basis for heterosexual marriage is religion, then no problem approving gay marriage, right? Or more realistically, since the idea that Adam and Eve even existed, let alone that Eve was made from Adam’s rib, is complete malarkey, and that’s they’re only argument against gay marriage, then equal rights here we come! …I have a feeling my argument isn’t going to go over well with them. 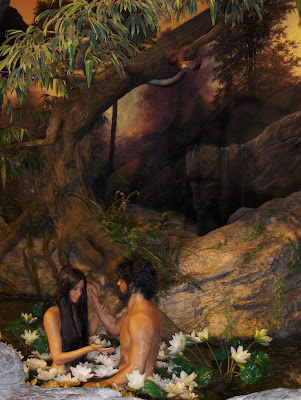 Note the serpent lurking overhead and the fact that the fruit from the Tree of Knowledge actually looks more like grapes. Guess the Creation Museum didn’t want to get involved with the cultural meme of the fruit being an apple. Right about then PZ randomly appeared behind us, so we slowed down a bit to be a part of the hilarity. Then it happened. They ate the fruit, and the museum went from being a peaceful garden of Eden to scary as hell again.