This is when we got to the scary part of the museum. Well, intentionally scary – the whole place is accidentally horrifying. But this section was supposed to represent how horrible the world becomes when we don’t listen to the Bible. I mean, we all know how atheists are the reason that the moral fiber of society is being destroyed. Duuuuhhh. Just looks what happens when you start questioning things: 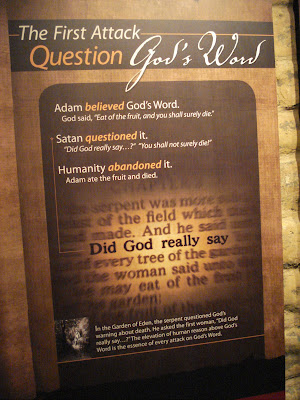 Yep. Satan questions things. You better all stop that thinking right away. (EDIT: Forgot to point out the Adam dying when eating the fruit part. See that? I wondered, but Adam didn’t die when he ate the fruit, he lived hundreds of years. Later another sign clarified that it was his soul that died, since apparently that’s what really matters. And I thought they didn’t interpret the Bible metaphorically.) Oh, but don’t think you liberal Christians are getting away scot free: 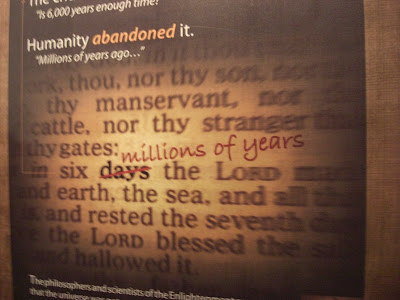 Those philosophers and scientists of the Enlightenment! Look at all the trouble they caused by interpreting the Bible metaphorically! Oh and they gave a shout out to my ancestors, the Greeks. This line makes me laugh: “But the common people were converted, the old ways rejected…” That’s something to be proud of? That the poor, impressionable, uneducated people were forceably converted to Christianity? If anything, that shows how vile Christianity can be when people try to force it on each other. And we all know Zeus was way cooler than God anyway. 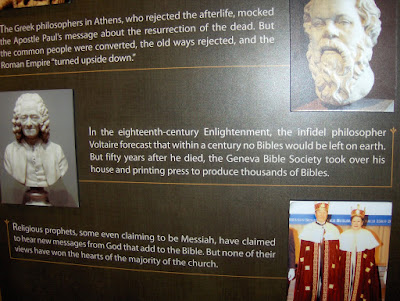 Oh, and total win for Voltaire being called “the infidel philosopher.” Yeah, this is really unbiased writing here. But seriously, if I ever get famous enough to be put in a religious museum because people hate me, I want to be referred to as “the infidel blogger.” I guess Pastor Tom blocking me from his blog and calling me a “maniacly insane blogger” is close enough.

But again, I don’t want to make it seem like they were just pointing fingers at the scientists and philosophers. They really didn’t seem to like anyone who didn’t subscribe to their very literal brand of Christianity. Liberal Christians really miffed them, and man was there a lot of anti-Catholic stuff. They basically said the Pope has no idea what he’s talking about when it comes to God. Oh, and of course, you can’t forget Dan Brown. Writing a fiction novel is just as bad as being an atheist or a Catholic, apparently: 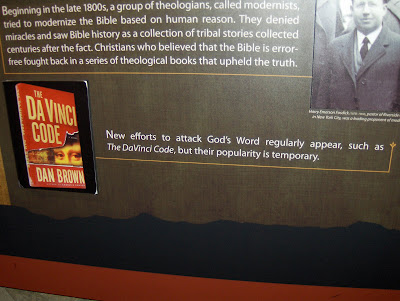 What a diss. Sorry Dan, can’t stay on top of those best seller lists forever, I guess.

They also touched on the Scopes trial, which had an epic amount of fact fail. They claimed that William Jennings Bryan took the case because he wanted to stand up against evolution, since it caused the evil eugenics that Nazi Germany used. Ignore the fact that a “museum” just invoked Godwin’s law: the Scopes trial took place in 1925, fourteen years before World War II began. What the hell? EDIT: Apparently Hitler started voicing his approval of eugenics right around when the Scopes trial took place, so I stand corrected.

This pretty much sums up how I feel at this point of the trip: 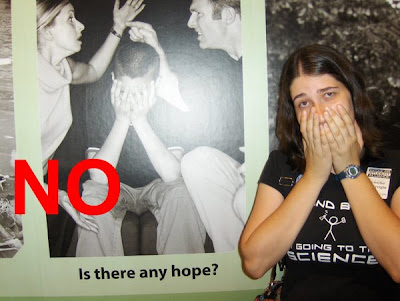 So what actually happens when you have philosophers, scientists, religious people, and writers all joining together to critique religion? 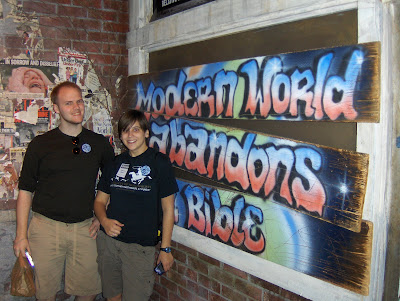 Woooooooooooooo!!! Oh, wait, I’m supposed to be upset about that. Er, boo hoo?

I think this whole section was reminiscent of a hell house. It doesn’t look so scary in photos because the flash lights everything up – it was actually quite dark and gloomy in this section. The first wall you see is covered in magazine covers talking about homosexuals gaining rights, evolution, and advances in stem cell research – horrible, horrible things of course. It’s main goal is to show how not following the Bible leads to moral decay and chaos. I know that’s hard to figure out, since their imagery is so subtle: 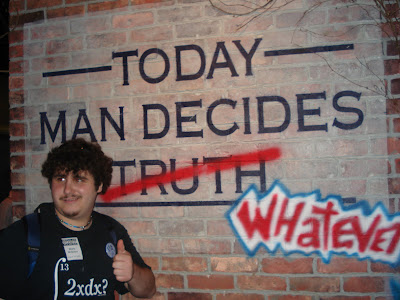 Oh, and for the commenter who wanted a photo of the Million of Years wrecking ball, here’s the best I could do: 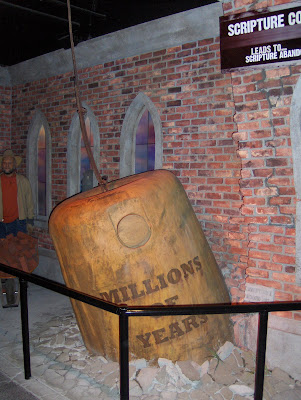 This whole section was quite hilarious because I actually agreed with some of it. Scientific evidence (for example, the idea that we’ve been around for more than 6000 years) is slowly destroying religious beliefs. The modern world is abandoning the Bible. They had a little section where you could peak into the windows of random houses (wow, vouyers too) to see what horrible things were going on. One guy was playing videogames in a dorm room! A girl was talking to a friend about boys on the phone! A guy was falling asleep during church! How horrible! Next people will be ripping the tags off mattresses and kissing before marriage and – no, it’s too painful to even think of what nasty things people will do after that.

I hate to be a downer, but let me be serious for a moment. This isn’t just something we can giggle at, though that was fun. Remember that the majority of the people who come through this museum are impressionable children. They’re going through an exhibit that shows doubting the Bible leads to crazy sex (well…that may be true), destruction, and hopelessness. I didn’t take photos of some of the worse things they were showing, like death or suffering or Nazis (yes, again with the Nazis). But how willing are children going to be to even start thinking about the Bible if they’ve been told these awful things? Are they ever going to want to interract with people who don’t think like them?

I do have to thank the Creation Museum for putting a light at the end of the tunnel though. Figuratively speaking – the room was still dark. But these two signs definitely made me feel better: 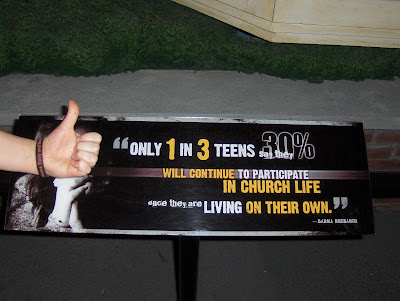 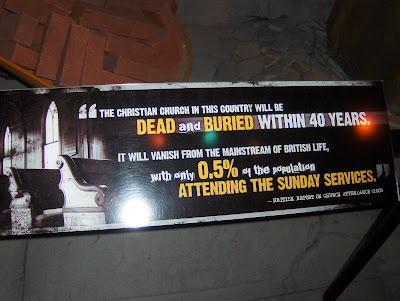 I think the Creation Museum finally got something right!