It was time to finally enter the exhibit. I had already been tweeting away, but my friend Josh said he couldn’t get any service on his iPhone. Turns out I was one of the few people who actually had cell phone reception during the main part of the exhibit (I know both Hemant and PZ were having trouble with their iPhones too, and all of Mark‘s tweets tragically came in days later). This shocked me, since I have US Cellular. I wouldn’t be surprised if you’ve never heard of it – it’s a service provider located in Chicago, and if you get out of the suburbs, you have shitty service. I’m usually roaming and down to a bar or two. Inside the Creation Museum? Full bars. While no one else had service. That’s when I knew I had entered Bizarro World. Up was down, black was white, evolution was a lie, and US Cellular wasn’t crappy.

The entrance was remade to look like Antelope Canyon and was pretty cool looking. As a keen hiker this was particularly exciting. For as long as I can remember, I have always wanted to go on a hiking trip to antelope canyon. I just love embarking on outdoor adventures. Actually, now that I think of it, many parts of the museum involved you walking through somewhat narrow corridors with seemingly no escape, since you had to walk through the entire linear exhibit before you could get out. A claustrophobic person would not enjoy themselves there. Anyway, once you make it through, you’re greeted with this sign: 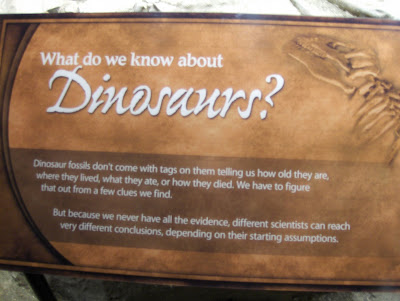 This sums up a major theme of the museum: Scientists and creationists are using the same data, but since they have different starting points, they come to different conclusions. Which honestly, is true. Scientists have the starting point of logic, reason, and background knowledge based off of many previous experiments. When they see data, they use those things to come to an appropriate conclusion. Creationists, on the other hand, have the starting point of the Bible, which is also their conclusion. When they see data, they try to figure out how to explain the data so it fits their already established conclusion. 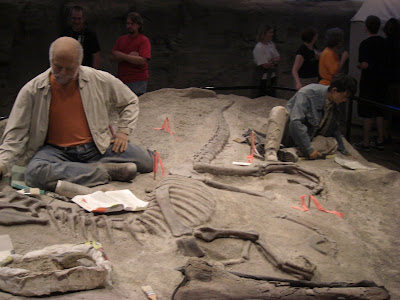 Oh, and let’s not forget that the creationist is a wise old white man, but the evil scientist is a young Asian man. Woo, let’s use xenophobia to further our argument. Anyway, so yes, this sign is true: 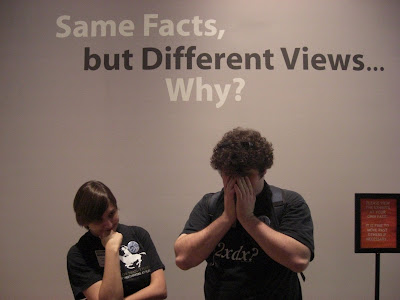 But why? Because Creationists are delusional and full of crap. Just because Creationists can come a different conclusion doesn’t mean that conclusion is valid – especially when their starting point is a ridiculous book full of impossibilities and contradictions. I know I’m preaching to the choir, but this was a very annoying trend in the exhibit: taking scientific facts and twisting them in order to fit their preconceived ideas. And just for an example on how stupid some of these questions got: 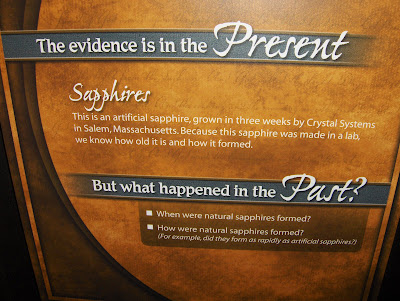 Are you shitting me? You use the creation of artificial sapphires to support your claim that sapphire formation goes much quicker than we think? Again, they need to come up with crazy ways to distort facts (sapphires take a long long time to form) so they fit into their worldview (world has only been around for 6000 years). I don’t need to tell you this, but laboratory sapphires undergo much more extreme conditions that would be found on earth, so they can form faster. Of course, the Creation Museum would probably just tell you these extreme conditions were causes by the flood or fire that rained down on Sodom and Gomorrah or Xenu hurtling atom bombs into volcanoes – er, whoops, wrong fiction story.

And yes, there was much face-palming that day. Especially when I found out that God is a Caps Lock troll (who possibly inspired Popeye the Sailor): 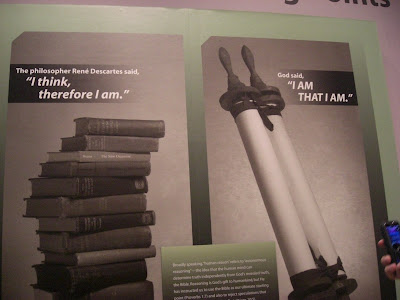 This room started a related trend: Hating on human reason. We’d see these sorts of signs throughout the rest of the museum: 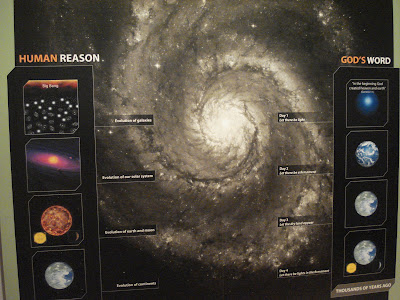 Human Reason on one side, God’s Word on the other. This drove me crazy for many reasons. One, it obviously implied that human reason is bad. The whole purpose of this museum is to promote God and the Bible as the literal truth and to expose the “lies” of science. Putting up Human Reason against what they see as the truth clearly paints it as wrong, the bad guy, evil. It pains me to see reason, one of the greatest virtues I think a human can have, be treated as a sin. It doesn’t surprise me, though – there have been plenty of Christians throughout history who have been against intellectual curiosity. I guess we should be thankful – they could have just as easily put “Satan’s Word” with scientific thoughts under it, which would probably make people hate us scientists even more.

The second reason this drove me nuts was just because the scientific truth was actually there! From the Reason vs God signs I read, they did a very good job at simply explaining scientific processes. To think of all the people who are actually standing there and reading the truth and not recognizing it drives me mad. It’s like watching someone play Marco Polo or Hot and Cold and just barely missing their target. They’re agonizingly close to the truth, but then they miss it. Sigh.

And yet another theme of the museum was that Science is Hard, God is Easy: 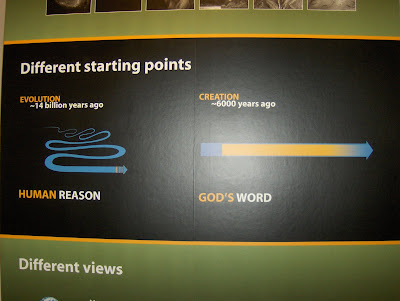 Again, I think I’ll agree with that! For most people, science is harder to understand than just waving your hands and saying “God did it.” Zeus hurtling thunderbolts was easier than understanding lightning. I say most people, though, because I find it nearly impossible to comprehend how insane God logic makes sense to people, since I was never raised religious. But I loved how they graphically represented this. See, science is winding and confusing and always changing, but God’s word is constant and perfect and immutable. Therefore, God’s word is correct.

Wait, what? If anything, the fact that science changes is what makes it so beautiful. It admits when it’s wrong and strives for a better truth. Yes, this makes it more complicated, and yes, means that some minor things we accept today may be false (key word: minor. We’re not going to discover the Earth goes around Jupiter or that evolution is false). But it is light years ahead of how much of God’s Word is true. All you have to do is crack open a Bible to see all that’s wrong within it. Just to make your blood boil even more, here’s a detailed view: 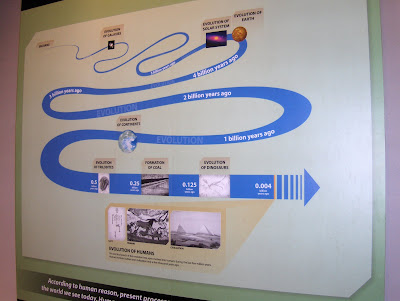 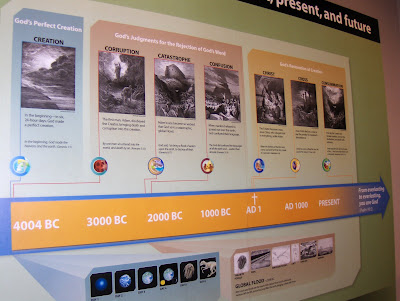 I’m really not quite sure what the heck is going on in the evolution sign. Galaxies and solar systems are still developing (I don’t think I’d say evolving, but let’s not play the semantics game with fundies), they didn’t just stop once Earth was formed. I’m not too sure why the formation of coal is so important. Actually, it was at this point that I just stopped trying to figure out how any of this supposedly made sense. Facepalming rates increased greatly.

The “Science is Hard” and “God is Easy” didn’t end there, though. They also applied it to their version of human evolution. Well, not evolution, since they don’t believe in that. “Kind” variation generation or whatever the hell they were trying to suggest that was basically the same as evolution: 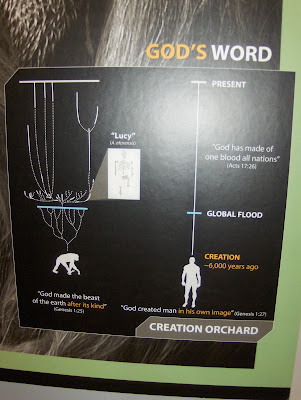 See, apes are confusing! They have lots of complicated branches and extinction events. But humans are perfect. They’re special. They’re just a straight line, going on unchanged throughout time. Unfortunately, I think this is a view I’ve heard from more liberal Christians that accept evolution: that other animals evolved, but man didn’t. Not entirely sure how that works: did man just poof into existence one day, after the animals had been chilling and evolving for all those years? My…brain…explode blaahhh! 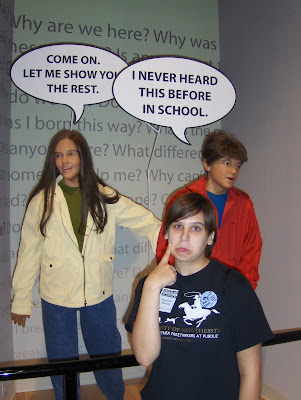 Yes, and we hope to keep it that way. This fairy tale nonsense deserves no place in schools. Just look how sad it made Vanessa!