After the mastodon is what I think is supposed to be a brief “introduction” to the museum. Aka, getting right to calling scientist delusional liars and preparing you to witness dinosaurs and humans mingling together: 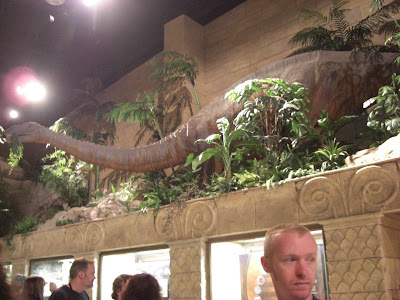 This museum is overflowing with dinosaurs. I initially found it strange; I mean, this is supposed to be about all creation, right? There are other animals in the exhibits, but no where near the number of dinosaurs. I can think of millions of interesting things you could say about amphibians or birds or mammals or insects or whatever, and I’m sure they have millions of ways they can twist those facts to fit their own agenda.

But once you look at the usual demographics of the museum, you know why there’s all the dinosaur hype: kids. Nearly all of the theists there (recognizable by their lack of a name tag and their looks of shock) were with families. When I saw a large group of 7-ish year olds walk in on what seemed to be some kind of field trip, my heart sank. The Creation Museum isn’t for the believing adults whose faith is strong, or the atheists who come to giggle and likely won’t be converted: it’s for the impressionable youth. These kids are getting brainwashed, and who knows if they’ll ever be taken to a real natural history museum. And what better way to brainwash children than to have exciting dinosaurs? I know I loved dinos as a kid, and I would also believe whatever an adult would tell me. This sort of million-dollar-budget indoctrination is hard to undo.

The other thing the museum beats over your head is that humans and dinosaurs lived at the same time. It’s preposterous, but necessary for them. Creationists already have their “conclusion” as told to them by the Bible, and they have to take reality and warp it to fit their preconceptions. They know the Earth is 6000 years old, so how do they explain dinosaur fossils? Apparently it’s less crazy to say humans and dinosaurs roamed the earth at the same time than to claim God buried fake dinosaur fossils to test people’s faith. I mean, that would just be silly. 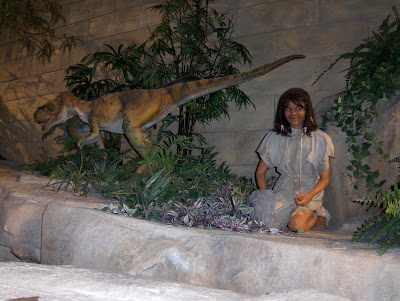 And to be honest, the fake humans really freaked me out. They fell right smack dab in the middle of the uncanny valley. This little girl was especially freaky because she was animatronic, and her eyes would shift back and forth. I think I died a little inside when her eyes stared right at me. Made me wonder if they’re really some sort of video camera, like in one of those old haunted houses. I can just imagine Ken Ham sitting behind a bunch of surveillance cameras, watching as the atheists file through his museum.

The pre-main exhibit display cases were attempts to make people doubt evolution and raise questions that would later be answered (Spoilers: The answer is always “God did it.”). Since I’m studying both genetics and evolution, parts like this in the museum really made me want to cry. For example: 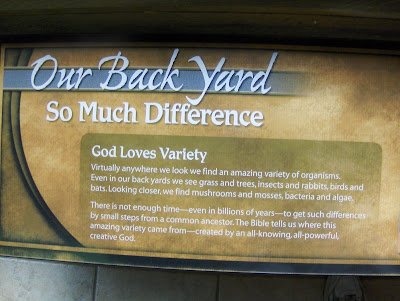 Standard creationist argument, right? There’s not enough time for evolution even in a billions of years (which is an outright lie), and we all know the Earth is only 6,000 years old because all “facts” are provided by the Bible. Therefore, evolution is a lie. The weird thing about the museum is that they actually try to use genetics and natural selection in their later exhibits, but they’re just setting themselves up to fail. Their stance isn’t even consistent through the museum (not surprising). For example: 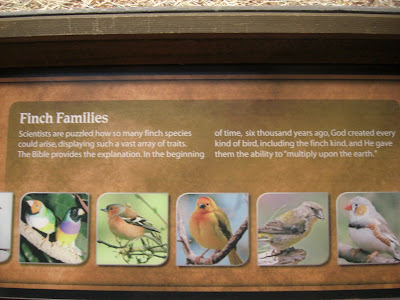 Here, there’s no way all this diversity could have evolved, right? God made all the finches unique (they even had about 7 beautifully colored live finches in a display to make their point). Sounds like the standard creationist argument: Except the Creation Museum believes in natural selection. They have whole exhibits explaining how a single “Kind” of animal that was brought on the Ark had enough variation that through natural selection it produces lots of different species. For example, two proto-horses brought on the Ark would later produce modern horses, donkeys, and zebras. 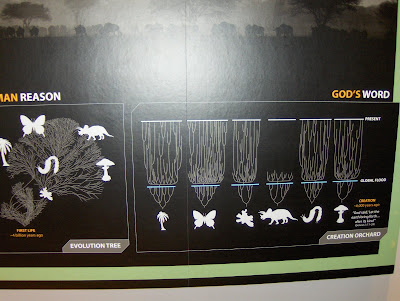 I honestly don’t understand how they say the appearance of new species over time from a common ancestor is not evolution – it’s like staring at an apple and asserting it’s an orange, or more appropriately, sticking your fingers in your ears and yelling “LA LA LA!” But regardless of that inanity, why didn’t they use that explanation for the finches? Why not say Noah brought a “Kind” on the Ark that was a basic finch, and after the flood it turned into different finches? You would think if they’re just making stuff up, they would at least be consistent about it – of course, look at the Bible. I’ll talk about what’s actually wrong with the “Kind” hypothesis once I actually get to that part of the museum.