I’m finally home from this crazy, awesome, non-stop weekend. People have been asking me how the Creation Museum was, and I always have to pause before I answer. There is just so much to say about it that I don’t know where to begin. In order to make sure I don’t forget anything, I think I’m just going to retell my trip in chronological order. This is going to take multiple posts, so stay tuned throughout the day!

Mark, Josh, and I left around 6 am Friday morning. The drive from West Lafayette, IN to the Creation Museum in Kentucky was supposedly a little under 3 hours, and we didn’t want to be late. I was driving (won a lovely travel grant from the Secular Student Alliance, thank you!) and functioning on about 3 hours of sleep due to over excitement the night before, but I was so pumped that morning that it didn’t really matter. Only about 45 minutes into our drive we saw an anti-evolution billboard which seemed very appropriate for the day. Really not surprising though – if you’ve ever driven through Indiana, you know religious billboards are a common sight.

I thought Kentucky was much prettier than Indiana. It’s always a relief to see rolling hills and something other than corn and soybean fields. When we were about 15 minutes from the Creation Museum, an eerie fog rolled in: 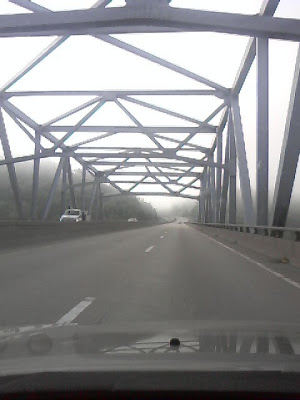 Me: This is really creeping me out. It’s like we’re going to Jurassic Park.
Josh: Through the mist of time, back to the beginning… six thousand years ago…

In a movie like fashion, the mist cleared once we arrived at the museum gates. When we parked there was already a small gaggle of heathens hanging out in the parking lot, even though we were an hour early. There was something very strange and satisfying about knowing those people you’ve never met are your allies. I mean, it wasn’t hard to figure out who was in the group, since everyone was wearing science or atheism shirts. Four of my other Purdue friends who were driving in a different car arrived right after us (even though they left 20 min before…whoops, guess I was being a speed demon). Eventually the group was getting a little too big, and since I didn’t want anyone to get run over by a car, I sort of ushered the group towards the front of the museum. I think it’s instinct for me to go into my Leader role when dealing with a bunch of atheists, haha. A security guard checked out bags, which was really just a quick glance and not invasive at all. Everyone was very polite and cooperative. This is also where we met our first dinosaur: 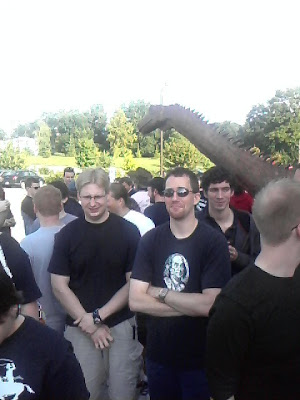 The Creation Museum was nice enough to set up a little tent for our group so we could check in in an organized fashion. I was near the front of the line since we got there early, and it was very fun to watch the group grow. 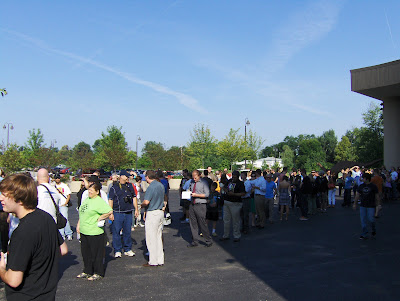 Almost immediately after I signed in, PZ walked right by me. Apparently I visibly freaked out in a fangirlish way, because my friends started laughing at me. I didn’t want to bother him since he just got there (and I was still too shy), so we went to get into the museum. The first thing you can do when you enter is get your photo taken in front of a green screen to make it seem like a giant T-Rex is about to eat you. The Purdue group – 8 students and a mom – thought why the hell not, and took one. The photo was hilarious, but then we found out it was 15 dollars to get a copy. Screw that. I had already spent 10 bucks to get in, an I wasn’t giving them a penny more.

Immediately after that I spotted the infamous Pastor Tom walking around the entrance. Not wanting any kerfuffles, our group quickly moved towards the exhibit. The first thing you’re greeted with is an impressive mastodon: 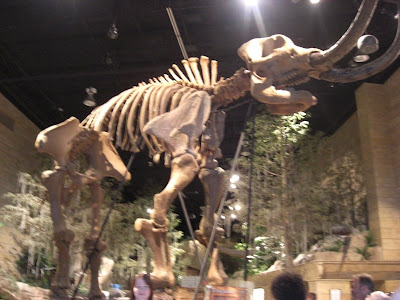 It’s description, however, was less impressive. I made a mistake of not taking a photo of the sign so I don’t know the exact number, but they hilariously think that the last ice age occurred within the last two or three thousand years. We already had major human civilizations around at that time, many of those who had written records. I don’t think we’ve discovered any Egyptian hieroglyphics about extreme temperature changes. They’d probably claim that just because we can’t find them doesn’t mean they don’t exist (sound familiar?). But really, it’s pointless to harp on this one fact, since the whole museum is filled with ridiculous dating. As PZ already pointed out, it’s hilarious that they take the time to say dinosaurs were alive and well in 2348 BC. I wonder what would be harder for multiple human civilizations to fail to record: giant lizard creatures roaming the earth, or drastic temperature changes and cold? Hmmm…