This guy needs to learn the term “slashers”

Guy Ritchie’s plan to put a gay spin on the relationship of Sherlock Holmes and Dr. Watson in his new movie about the detective and his sidekick could backfire.

Robert Downey Jr, who plays Holmes, has revealed the crimebuster will sleep with and have sweaty grappling scenes with Watson, played by Jude Law, in “Sherlock Holmes,” due out Christmas Day.

“We’re two men who happen to be roommates, wrestle a lot and share a bed. It’s bad-ass,” Downey told Britain’s News of the World. Added much-in-the-news Law: “Guy wanted to make this about the relationship between Watson and Holmes. They’re both mean and complicated.”

But Michael Medved, a former Post movie critic, says Downey and Law must be joking. “There’s not a seething, bubbling hunger to see straight stars impersonating homosexuals,” Medved told us. “I think they’re just trying to generate controversy . . . They know that making Holmes and Watson homosexual will take away two-thirds of their box office. Who is going to want to see Downey Jr. and Law make out? I don’t think it would be appealing to women. Straight men don’t want to see it.

This man has clearly never talked to a straight woman who wasn’t a fundamentalist or an uber-conservative. Are you shitting me? When I saw the trailer for Sherlock Holmes I flailed with girlish glee, which honestly doesn’t happen too often. But a Sherlock Holmes movie? With Robert Downey Jr.? And Jude Law? Dressed in period clothing? Bickering like an old married couple with homoerotic undertones? Fuck yeah, eye candy. I’ll happily shell out eight bucks for that.

If you could assure me Downey Jr. and Jude Law would make out, first I would cry tears of joy, then I would probably go back multiple times. As would a very large number of women (proof? go read the comments on this LJ thread). We’re the people who saw Brokeback Mountain for teh gay (actually didn’t like it, but that’s because I went for the gay, and I usually hate those kinds of movies). We’re the people who shat bricks of pure bliss when Harry Potter Book 6 essentially made Harry/Draco canon. We’re 95% of the people who read and write slash (homosexual) fanfiction – the straight gals, not the gay guys. We are more than enough to make up for the homophobes that would be scared away.

I highly doubt the movie will have anything more than homoerotic subtext, but that’s fine by me. Imagining what’s really happening it half the fun anyway. And if it wasn’t nearly 3 am, I’d have some insightful comment as to why straight women love homoeroticism, and how this mirrors men’s stereotypical love of lesbians. But it is 3 am, so I’ll just leave it at this: 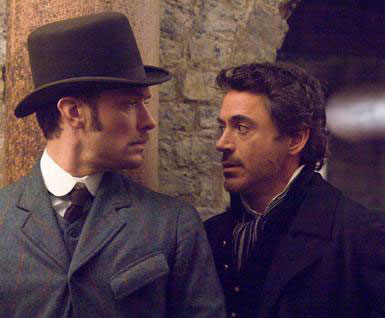