My life is weird

As I was mulling around some indie games at PAX, a very familiar face approached me. Very familiar, because I was certain it was Jerry Holkins, the writer of Penny Arcade (“Tycho”) and half of the duo putting on the very awesome convention I was currently enjoying.

“Uhhhhh.” I glanced down at his name tag. Yep, Jerry Holkins. “I know you, but I’m pretty sure you don’t know me.”

Keep in mind the expo hall was super loud with the various bells and whistles of video games going off in the background, so it was hard to hear what he was saying. Plus I was very confused. And a little fangirly.

He asked me if I had a game there, and I said no. Now I was convinced he was mistaking me for someone. But then he seemed to remember something and said something about seeing me holding up a sign, but that just confused me more. I don’t remember holding up a sign anywhere.

Then he said “I followed all of Elevatorgate!”

I then realized the “sign” he was referring to was my profile photo here. I was a little dumbstruck, and bumbled out something along the lines “You read my blog?” Yep. 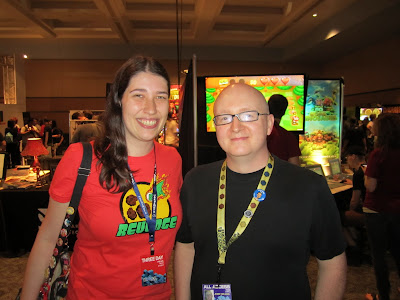 I’ve oddly gotten very used to strangers approaching me (which also happened a couple of times today). Within the last year I’ve gotten used to famous people within the atheist or skeptical movement approaching me. But I’m definitely not used to someone from a totally different corner of the internet I appreciate approaching me.

And as an unrelated PAX update – I collected six gym badges today. Though to be honest, one was because I came up with a Pokemon haiku, another was because the IR connection kept glitching, and the third was because I was a “good sport” as I got my ass kicked. I’m going for the Ash Ketchum route to the Elite Four. I have no shame.