by Jen on Sep 1, 2011 • 11:01 am 5,806 Comments
Sorry for the dearth of posts lately. Between PAX and moving, I pretty much haven’t been on the internet at all. I went four days without checking emails, which I think in a new record for me. Anyway, I’m still unpacking and doing other apartment related stuff (woooo, Ikea run!), but I wanted at least some kind of filler. So, uh, here’s me cosplaying at PAX as the main character from Pokemon Black & White: 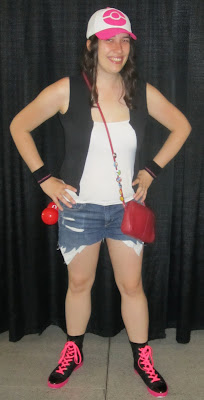 …Not quite a 12 year old Japanese girl, but close enough.

Probably the best compliment I got was that two random people asked me where I bought my hat…but I painted it! Without tape or drawing circles! Freehand! I’m just that awesome.

Previous postI'm not the only one moving to a new home Next postI swear I haven't abandoned you!