Purdue has been full of events dealing with religion lately. Yesterday I ran into this group: 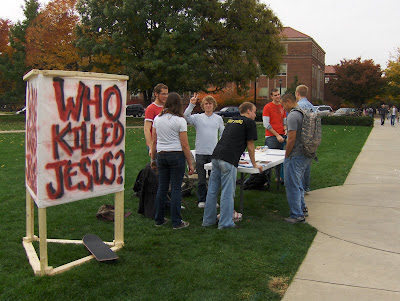 Some of my club members mentioned they were on Memorial Mall on Wednesday, so when I saw they were still there, I dropped by. One of my friends blogged about his reaction, which was different than mine since he grew up Jewish. He initially thought the event was going to be something anti-Semetic since Jews are often persecuted with the explanation that they’re the ones who killed Jesus.

I ended up talking to some of the people there for about an hour. They were very nice and thoughtful, definitely not extremists or anything. I was kind of amused because a couple recognized me – they’ve read my blog (hello!). I assume this is because the pastor that’s leading their Q&A session tonight (which is what this was advertising) is Brent Aucoin, who you might remember as the pastor who visited my presentation on the Creation Museum.

That being said, I still fundamentally disagreed with what they believed (big surprise, right?). Most of the stuff we discussed has been gone over a ton by other people already, so I’ll just touch on what I thought were some of the more interesting points.

1. I really need to brush up on my philosophy/theology. Everyone has their area of expertise, and mine is definitely the evolution/creationism debate. I don’t think someone should be expected to be an expert on everything, but I feel kind of stupid when I can’t coherently discuss religion on the spot. I definitely feel more comfortable when I have a moment to reflect, which is why I like blogging. Not signing up for a debate any time soon.

2. One of their main points was that they don’t believe that salvation is works based. The most important thing is to accept Jesus and believe in God, and once you do that you will live your life accordingly. Even if you’re a good person, you would go to hell because everyone in a sinner and rejecting God is pretty much the worst thing you can do. Obviously I don’t believe God even exists or that Jesus had any supernatural abilities (I doubt if Biblical Jesus even existed), which kind of makes the point moot, but let’s just say they’re right.

On one point, I agreed with them. You don’t want people doing good acts just to be rewarded, or avoiding bad acts just so they won’t be punished. You want people acting good for goodness’s sake. But that’s where the agreement stopped. I just can’t imagine a God so full of himself that the most important thing in the universe – punishable by eternal suffering – is not worshiping him. In their point of view, God is awesome so that is awful if you don’t see his beauty – but if it’s so important, why does he even give you the ability not to believe in him? God gave us free will and the ability to do evil things, or to reason and come to the conclusion that he doesn’t exist. He also knows everything that will happen in the universe, so he knows people will end up doing things that will damn them. So didn’t God therefore do the damning?

tl;dr, free will and omnipotence makes absolutely no sense.

3. Another point they made was about how Jesus sacrificed himself to us. A member brought up an interesting point at our meeting on Wednesday, so I asked them. Is it really a sacrifice if there are no consequences for Jesus? Jesus is God and knows that when he dies, he’s going to come back from the dead and ascend to heaven, so dying really doesn’t matter. It’s like this: if a policeman pushes someone out of the way of a bus and dies, that’s a sacrifice. He saved someone else’s life at the expense of his own. But if Superman pushes someone out of the way of a bus, there’s no sacrifice because he knows he’ll be totally fine.

Their answer was that the sacrifice wasn’t death, but being pulled away from God. Jesus took on all of our past and future sins, and that brought him as far away from God as possible, which was agonizing to him. …This still doesn’t make any sense to me. Jesus is God, so how can he be brought away from himself? Even if that was somehow possible, he still knows it’s all going to be okay, since he’s God and all and knows the plan, so any agony is only temporary and not really a sacrifice. They then admitted the holy trinity doesn’t really make sense to them, which was yet something else we could agree on.

While I don’t agree with their beliefs or their reasoning, I was happy that they could intelligently talk about things. I’ve run into far too many people who belief something just because that’s what their parents told them, and they’ve never given it any thought. These people are definitely thinking, even though I think they haven’t reached the correct conclusions. They’re promoting discussion rather than just talking at you, which is always a good thing.

I’m interested to see what they say at tonight’s Q&A session – I’m guessing it’ll be similar to the discussion I had with them. Unfortunately for you guys, I’m not going to be masochistic and sit through it for your reading pleasure because I’m going on a date (amazing, I know). Sorry – unlike Jesus, I only make so many sacrifices.