This week was “A Week” on Facebook – a campaign for atheists to make their profile picture an A to show that we do, in fact, exist. Except that…well, no one except atheists know what the “A” symbol means – heck, many atheists don’t even know what it is.

The UNI Freethinkers and Inquirers have a much better idea, in my opinion:

No one outside of our movement knows what the “A” means. Yes, some people will look up what’s going on. Most won’t.
Want to actually help help with the movement? Grab a sheet of paper, write that you’re an atheist, and make that your profile picture. Hell, give us a link to it. Lets put these pictures around campus! Lets make a video! Lets actually out ourselves and show this campus how many atheists they know. A symbol is nice. A face is better. 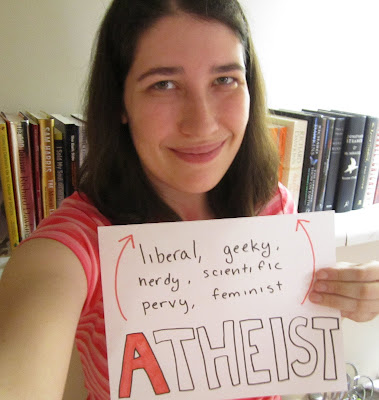 Why is this so important? A recent study showed that anti-atheist prejudice decreases not only when our numbers go up, but also when our perceived numbers go up. Coming out is good for all atheists. And linking a smiling face to “atheist” is much more helpful than a cryptic scarlet A.
Previous postI have an awesome new shirt Next postAnother quarter has started