I hadn’t seen a movie in theaters in ages, but I actually saw two today! Two different groups of friends wanted to go at different times. Hooray. The first one was Star Trek, so now all my geeky friends can finally stop bugging me to see it. I really liked it, but keep in mind I’ve never seen a second of old Star Trek episodes or movies before seeing this one. The extent of my knowledge was basically:

Now that I’ve offended every Trekkie out there… *ahem* I’m sure someone who’s expecting something in particular has their gripes with the film. I know I’m uber nitpicky when it comes to Harry Potter. But, as a Star Trek n00b, I thoroughly enjoyed the movie from an entertainment point of view. Though I have to admit, I was oddly unnerved by how sexy Zachary Quinto’s Spock was. Not quite sure I’m supposed to be having those feelings about Spock, but yum. Oh, and who else thought every time Spock got annoyed he was going to start slicing peoples heads open and stealing their powers? 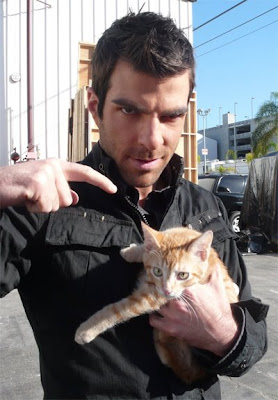 Noooo, not teh kitteh! Why do you need nine lives when you can never die?!?!

I also saw Angels and Demons, which I thought was pretty good. Definitely better than the DaVinci Code, but that’s not saying much. Now, I know people like to harp on Dan Brown, but I genuinely enjoy his novels. He’s no Shakespeare, but his plots are entertaining page turners so you can stfu if you think I’m dumb for liking them. Anyway, like I said the movie was pretty good – probably helped that I read the book years ago, so I didn’t remember it well enough to be super critical. Tried not to cringe too much at all the antimatter stupidity and told myself to suspend disbelief for a bit. I really liked the idea that God sent an atheist intellectual professor (Langdon) to save all of Catholicism – how ironic.

The one thing that bugged me was that it seemed to have a big “Science and religion are compatible, and when you think they’re not, that’s when you have problems!” message. It’s not that I just disagree with this – but the very premise of the movie seemed to disagree with it. I mean, it was anti-science Catholics versus pro-science Catholics (the Illuminati), not versus atheistic scientists. Heck, the two irreligious characters are the only ones not murdering and blowing things up – they’re actually saving the day. Maybe people will get that message out of the movie instead of the one the film trying to jam down their throat.