Yesterday I commented that Ray Comfort didn’t stop by Purdue to hand out his sullied version of Darwin’s On the Origin of Species. Since Ray changed the release date to the 18th to screw up secular counter-protesters, I thought that would be the last we saw of him. Well, I was wrong. Around 11:30 I started receiving a flood of text messages, IMs, and emails, all saying the same thing – the books were being passed out at the Engineering fountain at Purdue!

I alerted the masses via my own flurry of texts, tweets, and Facebook status updates, printed off a bunch of flyers from Don’t Diss Darwin (thankfully I was in a computer lab at the time), and ran off. I also had the foresight this morning to bring the batch of “I Support Science” Darwin Fish stickers we had been sent for free, and I’m glad I had them. 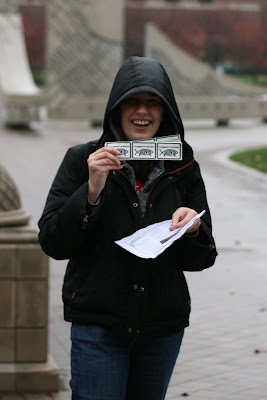 Oh, and did I mention it was raining all day today? Kind of sucked.

Right after I got outside of I saw someone passing out books in front of LILY – the biology building where I live, sort of extra insulting – which showed me that they were all around campus, not just by the Engineering fountain. After politely receiving a book, I set up camp next to him handing out flyers and stickers to anyone who took a book.

Soon he ran out of books, and I was about to leave when I was approached by two biology professors I know.
Prof 1: Thank you so much for doing this!
Me: Oh, no problem.
Prof 2: Can we give you some money to reimburse you?
Me: Huh? For what?
Prof 1: For printing off all of those books. It must have cost a lot of money.
Me: Ooohhh, the Origin? Nooo, those are creationists handing it out. They added an anti-evolution introduction linking evolutionary biology to Nazism. We’re counter-protesting them.
Prof 1: I knew something smelled fishy!! Now I’ll definitely have to go read it, hahaha!

After that I ran to the Engineering fountain and found three different people widely spaces out and passing out books. A friend of mine tackled two of them who were closer together, and I focused on one (after getting another book, gotta catch ’em all!). Very quickly he figured out what I was doing, and probably wasn’t too happy. I felt a bit bad since he was apparently a high school student roped into this, while everyone else were 40 year old white males. But I continued to hand out flyers and stickers, and more non-theists came to join me and take photos. 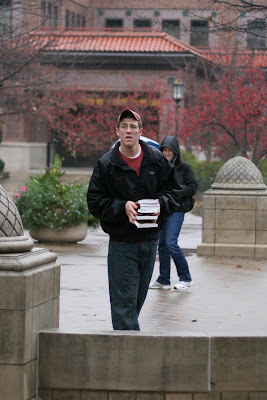 Lurk lurk lurk.
One of our members started talking to the people handing out books and asked if they had permission to be here. They skirted around the issue and just said they were with Living Waters Ministries. Purdue’s policy states that you can’t hand out anything on campus unless you’re specifically sponsored by a student group and a member of that organization is there with you – which was clearly not happening. However, we didn’t try to get them kicked off since 1) they were almost done passing out things anyway and 2) if they want to spread their stupidity, go ahead. We’ll just show how they’re wrong. 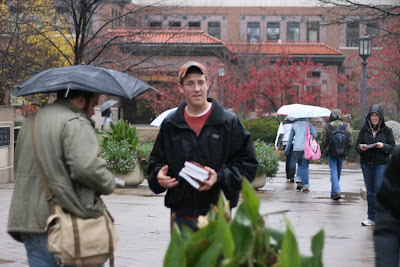 I then explained to this guy what the book was all about, and he heartily laughed.

Soon they were out of books, and congregated around where I was passing out flyers…and then they tried to debate me. They asked me about proof for evolution, and I started rattling of patterns in DNA, transitional fossils – but then I made the mistake of saying I was studying evolutionary biology. Immediately after that, they changed the topic to the Bible and how awesome it is because they knew they had no chance in debating me in biology.

I’ve stated this before, but I reeeaaallly hate debating people, especially about the Bible. One, I’m not good at thinking on my feet – I like having a keyboard and three seconds of thought. Two, I’m not a Bible scholar, so I especially hate Biblical debates. And three, I don’t freaking care. Their reasoning is so circular that it’s maddening, and I hate repeating the same arguments over and over again knowing that it is completely pointless and that I’m not going to change anyone’s minds. Thankfully Bryan (the guy I’m dating) appeared, and he was a great help since he’s currently reading the Bible and commenting on it daily over at his own blog. Still, after going through Pascal’s wager, the inerrancy of the Bible, the circular logic of God’s word making the Bible true, the “faith” of science, the God of the Gaps, God being infinite but the beginning of the universe needing a cause, atheists not trying to look for God, and morality as proof of God, I kind of wanted to die a little. Or punch babies, but that probably wouldn’t have reflected very well on me.

Eventually I had to escape because I was planning to meet someone for lunch. I later found out they were passing out the books not just in front of LILY and the Engineering fountain, but in front of the Stewart Center Wetheril, Ford dining court, Armstrong…and who knows where else. Unfortunately, we only reached a small group of people who received books since we didn’t exactly know what was going on, but something is better than nothing. We’ve alerted all the local media, so hopefully someone will pick up on it.

The only people who took Ray Comfort’s bastardized Origin were people who already accept evolution and are most likely to see through his deceitful bullshit. Them, and atheists who were gobbling them up like collector’s items. I got two, and other non-theist members were racing to grab one. I know when I’m teaching evolutionary biology at a university many years from now, I’ll be happy to wave this in front of my class and talk about the scary past where evolution actually had silly people fighting against it. At least, hopefully I’ll be able to say that. 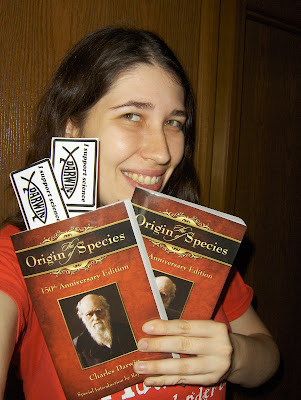