Interview about the aftershock from boobquake

I was recently interviewed by my local newspaper about the way boobquake is still affecting my life. It actually came out on Sunday, but I was so busy with TAM stuff that I missed it. Here’s the Q&A session from the article: 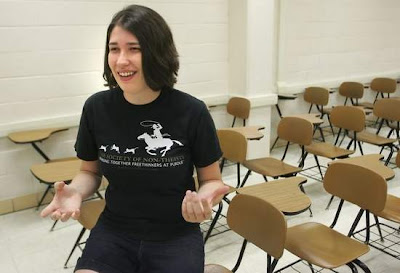 
Question: What are you writing for the HarperCollins book?

Answer: It is a tongue-in-cheek piece about atheist Christmas toys. I had a piece on my blog where I photoshopped an atheist Barbie because a female Episcopalian minister made a minister Barbie doll. I thought, “I want an atheist Barbie doll,” and I made it with all of these atheist stereotypes, like with a baby in a paper bag. So (the editor) saw this and asked me to write a new piece for the book. It is really cool and will be out this fall.

Q: Is this a launching point for you to do this humorous take on skepticism?

A: Definitely. That is how my personality is anyway. People see me as a more aggressive atheist, because I am outspoken, but I like to do it with a hint of humor. I do plan to keep blogging and talking about this and writing more in the future.

Q: Tell me about The Amaz!ng Meeting.

A: It’s the annual meeting of the James Randi Educational Foundation. They educate people to debunk paranormal, supernatural things. I am going to be talking about boobquake there. I am personally excited because there are a lot of celebrities talking there, like Richard Dawkins, Penn and Teller, and Adam Savage from MythBusters.

Q: Do you go to this every year?

A: No, this is my first time and my blog readers raised the money for me to go. … I put up a request for donations to cover the trip because some of my readers said they would donate if I did. I got $1,600 in 10 hours. I am donating the extra money …

Q: Is there a time when science should not question people’s beliefs based in culture or religion?

A: I don’t think science can answer why or ethical questions. When science finds something to be factually true, it should be religion that changes to accept it, not the other way around. There are people who believe they can ignore science because it does not fit into their religious belief. I don’t think that is how the world should work.

Q: Knowing what you are capable of, would you ever use your platform for another issue to rally people?

A: The boobquake Facebook page has over 100,000 people as fans. So I have occasionally sent out links on articles I think are interesting or pieces about women’s rights in Iran. When I started my blog, I thought no one would ever read it. It was just for my friends. But now I know people read it, and I have some influence.

Q: What have you learned about people from this?

Q: Have there been any drawbacks from boobquake?

A: It is a little humorous that I do have other academic accomplishments, and this is what I am internationally known for. But I figure I am still young and have a lot of time to make accomplishments in my research.

Q: Are people at University of Washington aware of you?

A: Yeah, I’ve actually been getting e-mails from people who are students and professors or Seattle atheists saying, “If you need a friend, we are totally here.” And that is totally cool since I don’t know anyone there, I already have people offering friendship.

I think this also serves as a perfect example as to why I blog instead of post videos to YouTube. Do I seriously talk like that, or is some of that transcript error? Sheesh ;)

I do like one of the comments on the article though:

Yeah, go central Indiana! And to think I chose my words very carefully for this piece. Just imagine if that person went to my blog.

Previous postWomen and Feminism at TAM8 Next postVatican: Ordaining women as bad as pedophilia