I think I’ve finally found something to start collecting

Because of Thanksgiving yesterday, I got to see my brother Chris and my sister-in-law Erin. I don’t get to see them too often since they live in New York, but they’re pretty awesome and I’m always excited to see them. To put it in perspective for you, they’re my only family members who know about my blog and who I feel comfortable being heathen-y around.

At one point in the night, Erin pulled me aside and told me they had a belated birthday gift for me, but that it may not be socially acceptable to open it in front of the rest of the family. That made me even more excited, so we ran off into another room where she presented me with a giant bag. She explained that while they could have mailed it to me, it had some back story so they wanted to give it to me in person. She then dug around in the bag and handed me the Thanksgiving Chick tract.

I know this is totally what my Thanksgiving looked like.

I laughed and joked how I was starting to collect these things, since my friend gave me an evolution one a couple weeks ago. Erin smiled and said I wouldn’t have to try too hard to collect them…because she and Chris had given me every single current Chick tract. I kid you not: 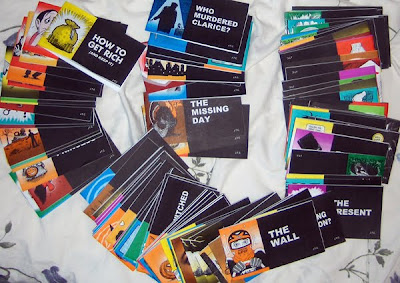 I now own 106 Chick tracts (with a couple of duplicates, but not many). How the heck did Erin get all of these? That story is even crazier. Apparently when she was attending high school in California back in the 80s, Chick tracts were constantly being passed out at her school. One of her friends got to meet Jack Chick and asked Erin if she’d like to meet him too. Being the adventurous heathen she was, she said sure, and had coffee with Jack Chick. Ever since then she’s been receiving free shipments of the newest Chick tracts.

Since Erin is a smart cookie and knew these would amuse me greatly, she called up Chick Publications and asked if she could have some more Chick tracts so she could share them with family over Thanksgiving – which is totally true, just not for the reasons they assumed. They were happy to spread the word, so they sent her a free box of the All Tract Assortment, which I now own.

That’s not all. Like a sign from some sort of atheist God (shhh, it doesn’t need to make sense) the box came with a free copy of a Crusaders comic. Which one? Primal Man?, the comic on evolution. Just too perfect. And if that wasn’t enough, they bought me R. Crumb’s Illustrated Book of Genesis, which I started reading during the car ride home. 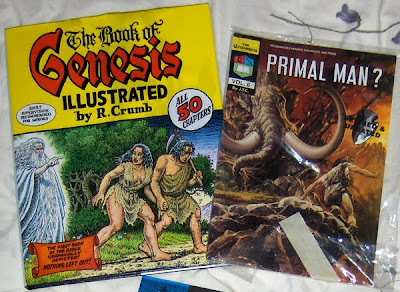 Not sure if I want to go for the whole set, though. I’d have about 940 left, and I’m not sure what I would do with that many Chick tracts…other than cry at their insanity.

Previous postI am thankful that by chance of birth... Next postDarwinTunes: Hands-on evolution of music