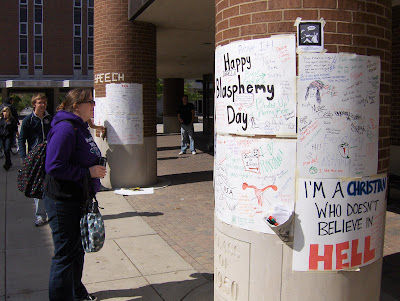 Wednesday the 30th was International Blasphemy Day, and Purdue was one of the many campuses where an event took place. What the heck is Blasphemy Day, you ask? Well, here’s the information the Society of Non-Theists had on the flyers we handed out:

Blasphemy Day International is a campaign seeking to establish September 30th as a day to promote free speech and stand up in a show of solidarity for the freedom to challenge, criticize, and satirize religion without fear of murder, litigation, and reprisal. The primary focus of the Blasphemy Day movement is not to debate the existence of any gods or deities, to promote hate or violence, or to insult or offend. Nor is it a movement of atheists – the tenets of one religion blaspheme against another if they disagree. The main objective of Blasphemy Day is to open up all religious beliefs to the same level of free inquiry, discussion and criticism to which all other areas of academic interest are subjected.

Why September 30? It is the anniversary of the original publication of Danish cartoons in 2005 depicting the prophet Muhammad’s face. Any visual depiction of Muhammad is considered a grave offence under Islamic law. The fury which arose within the Islamic community following this publication led to massive riots, attacks on foreign embassies and deaths.

So what did the we do? Like it stated, our goal isn’t to offend just to get our rocks off. And since Purdue is a fairly conservative campus, we went the safe route of just celebrating freedom of speech. We put up blank posters that anyone could write or draw on, with no censorship at all. 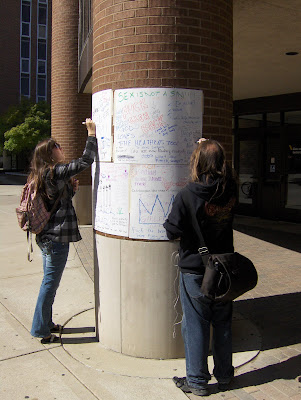 When I set up the event at 9am, we had 6 starkly blank flyers. At 11:30 I walked by on the way to my next class, and they were already full. By 12:30 when I returned, six more posters had been purchased by a new member (a friendly theist, actually!) and were already filling up. By 1:20, we had a total of 18 posters up, and by the end of the day people were having a hard time finding space to write anything new. It was such a hit next Blasphemy Day we might need custom posters and flyers made with the aid of an online poster maker like this one to see if we can get the message of free speech spread further. 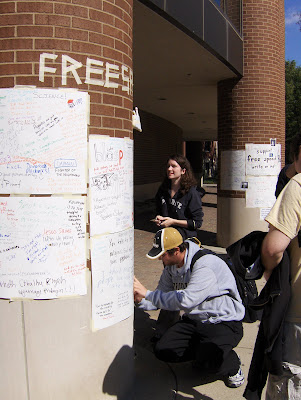 The messages ranged from politics, religion, and philosophy to potty humor, penis drawings, and internet memes. Some messages were deep, some were hilarious, and some were downright strange. Some I agreed with, and some I definitely did not. But that was the great thing about the day. I wasn’t offended if someone wrote about Jesus or Glenn Beck because our goal was to show everyone has the right to free speech, even if it’s criticizing others, including myself. 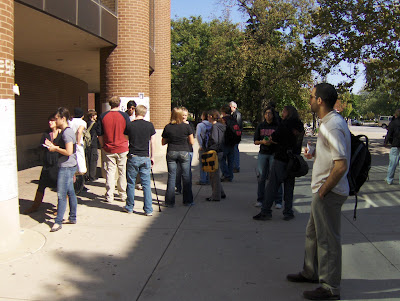 Throughout the day we attracted quite the crowd. Many random students wanted to add their opinions, and many more just wanted to read what others had said. I didn’t hear a single negative reaction through the day. Everyone was smiling and saying what a cool event it was, and people were asking if we could leave it up for the rest of the week. Unfortunately we couldn’t, especially since we later found out taping things to buildings is a no-no. 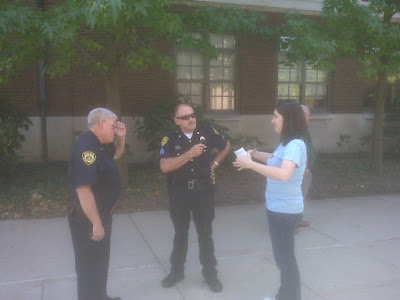 Yes, I had about a 30 minute conversation with the police about tape (I guess that’s how I pantomime adhesives). I think I scared the crap out of my members, because they had no idea what I was talking to the police about for the longest time. Effectively there was a miscommunication between me and the people approving the event (they didn’t realize we were taping it to the pillars), so it ended up not being a big deal at all, especially since we only had an hour of the event left. Pablo, the Dean of Students who I know from doing club stuff for the last three years, basically just had to come and make sure it was okay.

Pablo: Tape, that’s it? Man, I was ready to march down here and defend you guys and your freedom of speech and it’s just about silly tape?

All we had to do was promise to clean it up, so all was right with the world!

All in all, I’d call the day a success! Who knows, we probably offended someone (I think our mere existence offends some people), but the most common reaction was very positive. Let this be a lesson to all the atheist activists out there – you can be outgoing and controversial while still being nice!

Tomorrow I’ll have time to photograph each of the signs, and I’ll post them here for your viewing pleasure. But other than that, what should I do with them?! Art exhibit? eBay? Wallpaper to cover the hideous wood paneling in my apartment?