by Jen on Jul 13, 2011 • 8:27 am 363 Comments
Austria allows driver’s license photos to include headgear only for confessional – aka religious – reasons. That’s when Niko Alm got the clever idea to petition for headgear from his religion, the Church of the Flying Spaghetti Monster, by wearing a pasta strainer on his head. And he won! 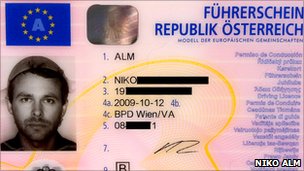