Wait, what? Mark pointed this new Post Secret entry to me: 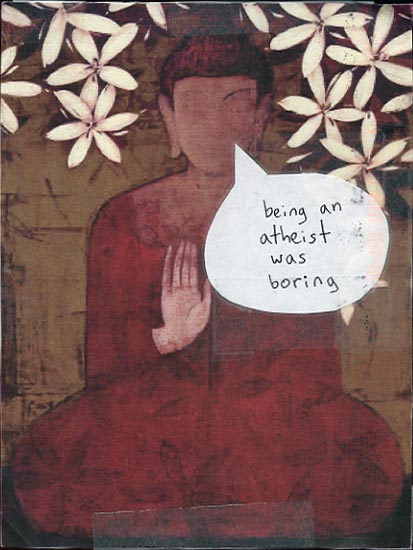 I had to pause for a moment to consider what this person meant. Atheism, boring? My best guess is that they mean since there’s no preordained meaning to life, no grand scheme, no “end goal” of eternal paradise, no supernatural occurrences…that that’s boring. Of course, I’m going to have to disagree. I think knowing that the world was formed naturally and that we’re lucky enough to be sentient in it is pretty damn amazing.

Is this any more boring because I know the chemistry and physics of stars, not that they are angels in heaven?

Is this any more boring because I know basic principles of geology formed it, not God?

Is this any more boring because I know it evolved, not that it was created?

I know I’m preaching to the choir (ha), but I don’t need an invisible man in the sky telling me what I should find meaningful. I find plenty of things beautiful and inspiring all on their own. Maybe that’s just because I evolved to have certain images and events trigger certain chemicals in my brain to make me feel good, but isn’t that in itself amazing?

But maybe I could be off. Maybe it’s the real world consequences of atheism that they find boring. Not going to church, not having holidays, not having local events. Even there, I think I’d disagree. I think even most theists find church boring, so that’s no great loss. Many holidays have totally lost their original religious connotations and can be celebrated even though you’re an atheist (I look forward to Christmas every year!). And the loss of community problem is shrinking with the more active atheist organizations we see popping up around the country.

Or, knowing the demographics of Post Secret, maybe this is some young person who called him or herself “atheist” because it’s “cool.” I’d like to pretend this isn’t happening, but there are more and more “atheists” who can’t give you a single logical argument why they don’t believe in God – not because those arguments don’t exist, but because they haven’t given it any thought. I can imagine some punk atheist kid (hell, how old am I, 80?) suddenly finding “atheism” boring and going back to angels and miracles and dudes rising from the dead.

Of course, this is all just utter speculation and could be complete BS. I probably shouldn’t try to interpret Post Secret cards so deeply. What do you guys think?