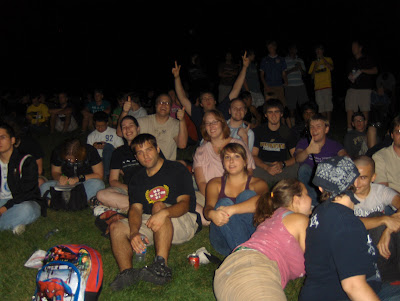 Proof I wasted my time going to this thing

We settled down on Slayter Hill, a big open air amphitheater on campus where you just sit on the grass to watch the stage. There were about 600 – 1000 people there (wide range, I know, I’m not good at guestimating crowds). The band was already playing (not well, but playing), and I was amazed that they weren’t playing Christian rock. Actually, the fact that they were singing songs I enjoy unnerved me a bit, because I suddenly heard the lyrics from a different perspective (Wait, this is about God and not his girlfriend?!). They even had about 10 female groupies in front of the stage jumping around with their hands in the air. Eventually they had 20 people holding hands and skipping around in a circle, at which point the giggling began.

As we were waiting for the real show to start, they had PowerPoint slides cycling through with what would be the only “scientific” facts of the entire show:

The show opened with a nicely produced video set to some hip hop music (dude, they get us) about how horrible sex and porn is. It’s true that some people can become addicted to porn. But this problem can be solved by visiting pornaddiction.com and learning about the help available. They had some skeevy looking guy taking of advantage of what I have to think was a thirteen year old girl, especially since they had toys and children’s drawings everywhere. Afterward the pastor* comes out and tells us this is a reality (*Side note: I just want to make it clear that these are the “good” Christians who say Jesus loves everyone, only God judges, love the sinner hate the sin, yadda yadda). Yeah, sexual abuse of children is a reality, but it has nothing to do with pornography and should not be used as an emotional tool. But that’s the only tool they have. The entire two hour presentation contained nothing but emotional arguments and personal stories – those “facts” I listed above were as close as you get to “science.” To illustrate my point, here are some of the scare tactics they used at the beginning (bold is their arguments):

Pastor: At some point you need to give up.
Us: …

His car broke down and while the mechanic told him it was something wrong with the spark plug, he knew it was God. And that’s when he stopped being an atheist and accepted Jesus. …Yeah, buddy, if you’re asking God for signs and you’re willing to believe events with rational explanations are signs, I’m inclined to believe you weren’t an atheist. Stop trying to make us look bad. He then went on to say how he was at peace, which including crying and puking… uh, okay, sounds real peaceful to me.

It’s like Christians have fabricated the problem of sex so they can come down and fix it. And that’s the only solution or “reasoning” they give: Jesus. All they repeated is that you need to follow God’s plan and be a pure person. “Jesus died and can help you,” but they don’t say how. They never give a single other reason other than God. What about people who aren’t Christians? What’s their incentive to stop watching porn? I guess they either forget us non-Christians even exist, they figure we’re a lost cause, or they see this as a good method to get us to convert to Christianity. The Religiosity Level was through the roof at this point as they told people to give themselves up to Jesus, and I really expected them to ask people to come up on the spot, but they didn’t.

Then the night took drove right past Religiousville and took a right into Bizarroland. They brought out Shelly, a former porn actress who talked so nonsensically that the whole audience (not just us) was murmuring in confusion and convinced that she was either high or that her brain was permanently warped from years of drug abuse (which she later admitted to). Her talk was not only rambling, but incredibly sexist and racist, which was even more ironic coming from a black female. It was so rambling that I can’t form coherent paragraphs about what she was saying, so here, have some lovely statements:

After they basically had to kick Shelly off the stage because she ran over her time and refused to stop talking, they went right back into the Christian rock band. That’s right, no time for questions. But you know what, it doesn’t really surprise me. This type of religion isn’t about asking questions or thinking for yourself. The event was to give you a biased view (no one pro-porn there) and to tell you what to do and how to think or else God will be very disappointed in you. I guess I was naive to assume they would encourage any intellectual discussion.

We then left and went to Qdoba to eat food and rant, and I’m sure some of the arguments we came up there were far more intelligent than the things I have just said. But I’m getting to the point where thinking about this depresses me, so I’m going to leave the rest of the insightful comments to you guys, and give you some funny highlights from the event:

Pastor: What better truth than the Bible?!
Non-Theists: *giggle*

Pastor: God wants to come inside you!
Friend: Woah, kinky

Shelly: *first comment* Sex outside of God’s intention is desicration.
Me: … *feeling insane at this point, lays down, covers face with notebook, and has a stifled tear-producing giggle fit, which in turn makes all the other members giggle inappropriately*
Friend: Jen’s down! Jen’s down! Monya [Treasurer], you’re our first in command now!

Shelly: What’s that one guy’s name with the long flowing hair?
Me: (from all the way in the back) FABIO!
Shelly: Yeah, Fabio! He’s used as a sex symbol –
Non-theist females: Ewwwww Fabio

Shelly: Any of you ever want to admit to having a roach in your apartment?
Me: *only person in audience who raises hand*
Shelly: Yeah, you live it up, girl!
Me: …Wait…IS SHE TALKING ABOUT MARIJUANA? I MEAN THE INSECT! *horrified, lays down in grass dying laughing along with all the other Non-Theists*
Minutes later
Friend: Jen! Now she’s talking about bugs! Either she was always talking about cockroaches or she just got confused mid metaphor.
Me: Knowing her, it’s the latter.

Shelly: How many of you girls have asked a guy what his life goals are before dating him?
Non-Theist girls: *raise hands*
Shelly: Only you four? You go girls! (Yeah, those evil, corrupt atheists…)

Shelly: How many of you have had one of those crazy drama girlfriends?
Some Non-Theist girls: *raise hands*
Angry Christian nearby: Faggots

Yeah, that last one wasn’t funny – just wanted to illustrate what we’re dealing with at Purdue.