A confession of astronomical proportions

I used to believe in astrology.

That’s embarrassing for me to admit, now that I’m a strong skeptic – but it’s true. While I never really believed in God, I wasn’t totally immune to supernatural thinking my whole life. Between age 13 and 17 I was very into astrology. Out of all things, why that? I think it happened for three main reasons:

Now, before you laugh at me, remember most atheists were at one point religious. Is believing that planets have some sort of control over your personality really that much more insane than believing in an invisible supreme being that cares about what you eat and screw, and sends his own son (who’s also himself) down to earth to save you from something bad one of your ancestors did by dying and coming back to life?

Anyway, when I say I was really into astrology, I mean it. I didn’t believe in newspaper horoscopes because I didn’t think they were done rigorously enough. I had books on astrology and drew my own charts. I would defend astrology and explain that it’s much more than your sun sign – that you have to look at the planets, and ascendants, and lunar nodes, and angles between all of these things, and what houses they were in… It was a complex art, and I told myself that people rejected it because they were only seeing the pop culture version of it.

Remind you of anything? Yeah, Christians versed in theology who claim people who attack “simple Christianity” aren’t really understanding what it’s really like. Astrology is no different, and let me tell you – something can be complex and nuanced and still be bullshit.

So why do I bring this up at all? Well, thanks to the boobquake media attention, I was contacted by the astrologer Eric Francis. He was a huge fan of boobquake, and extremely friendly. Even though he knew that as a skeptic I would probably think astrology is bullshit, he still wanted to do my chart for me (and gave me permission to poke fun at it). Eric didn’t know about my past relationship with astrology, which made me unable to resist. Even though I no longer believe in it, I wanted to know what a “real” astrologer would say.

You can find his full analysis here, but here’s just a taste: 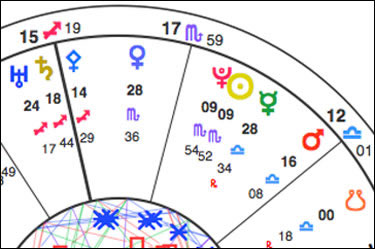 “And as you might imagine, she’s got it all going on — a Sun-Pluto conjunction in Scorpio, in the 8th house (she jokingly described herself as a sex-obsessed Scorpio, though her precise Sun-Pluto conjunction in the 8th house turns up the heat by a few orders of magnitude). This powerful alignment is conjunct the asteroid Astraea, the goddess of justice. So this is passion driven by a sense of balance and integrity.

Boobquake was planned for Monday, when the Full Moon happened to be fast approaching, carrying lots of momentum — with the Moon itself reaching full phase exactly conjunct her natal Sun/Pluto conjunction. So she was in the cosmic spotlight as well as the regular one. The Full Moon so personally aspected against her chart provided a sense of emotional presence, which is why this event, while funny, was taken seriously.”

Yes, I understand all of that. How I wish I could replace my astrological knowledge with those biochemistry reactions I was supposed to memorize.

It sounds cool, doesn’t it? Seems to make perfect sense (especially if you read the whole article) and fit the story well, right? That’s why astrology can be so convincing. It relies on something known as confirmation bias – people tend to remember accurate predictions and forget the inaccurate ones. Eric was able to come up with multiple examples of things that support my personality (which he learned about from my blog) and boobquake (which he learned about from the media). But he doesn’t analyze every single relationship in the chart (see all those lines in the middle?). I’m rusty on my astrology, but I assure you there will be things that don’t quite fit in there.

What I really should have done is given Eric fake birth information for me and see if he still makes it fit his story. Something tells me he still would have been able to dig some meaning out of that different chart. Unfortunately for skepticism, I was too nice to turn his good intentions into a science experiment.

But you want to know what the really interesting thing about that chart was? When I saw it, my initial thought wasn’t “I’m going to write up a huge post debunking astrology!” It wasn’t even “Now I can write a little backstory about how I used to believe this crap!”

Even four years after “losing my faith” in astrology, I still had an emotional reaction to it. All the emotional triggers were there, and I felt that same excited rush as when I would look at my own chart, or draw up a chart for a friend, or read about complex interactions that I didn’t originally understand. I used to not understand my religious friends when they explained the same experience. That an ex-Catholic would go to mass, and even though they no longer believed a word of it, they easily went through all the motions and had the same emotional reaction to their surroundings. That a crucifix or stained glass could trigger memories and dig up old feelings. That hearing an old hymn could make you feel closer to God, even if you now think he’s a fairy tale. That being told about the horrible torture in hell can instill fear in your heart, even if you know it’s not real.

Do these things prove that astrology or Catholicism are true? Of course not. What they show is how deeply people can get emotionally connected to their superstitions. That even after years of rational thought, certain stimuli still result in trained reactions. We all know about Pavlov’s dogs, but we have a hard time admitting it applies to us too.

Even though I know astrology is bunk, I don’t think I’ll ever totally shake the emotional connection. If people ask my sign, I’ll still happily reply “Scorpio!” out of habit (hey, at least it’s the most badass sign to have). If skeptical men use that as a dating litmus test, I’m screwed. When people poke fun at the vagueness of sun signs (the Forer effect), I’ll instinctively start explaining how it’s more complex than that, even though that’s bunk too – much like an ex-Catholic may still explain that no, Catholics don’t worship Mary, even though what they do believe is still nonsense. I’ll still poke through the Sextrology book at Borders and giggle at what my supposed kinks are because of my particular planetary alignment.

And while I still may get some enjoyment out of it, at least I know it’s not real. Now it’s similar to my fascination with Harry Potter – I can babble about how I’d totally be a Ravenclaw, but I don’t really think magic is real and my Hogwarts letter got lost in the mail. If I ever become a true believer again, feel free to stick me on the first train to crazy town – especially if it’s scarlet.

Previous postCharismatic prayers shut off skeptical part of believers' brains Next postWell, at least the Catholics will just come out and say it