by Jen on May 30, 2011 • 12:17 pm 512 Comments
Yesterday I went to the Sasquatch music festival out in Eastern Washington. It’s held at the Gorge Amphitheater, which is a ridiculously beautiful venue. 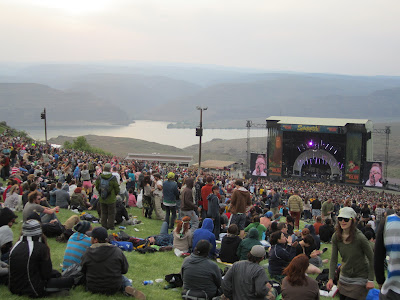 Though I shortly nicknamed it “The Gouge.” Seriously, $5.25 for a coke? $10.00 for a beer?! The worst part was you were stuck buying bottled water even if you brought a water bottle, because the only drinking water station constantly had a line of 100 people. And there were no signs indicating the hand washing water was actually recycled water, so tons of people were unwittingly drinking water people had rinsed their peed-on hands in. Ewwww.

I’m not going to lie – while I also wanted to see Flogging Molly, The Flaming Lips, and Modest Mouse, the thing that really motivated me to go was Tim Minchin. And I was in the front row! 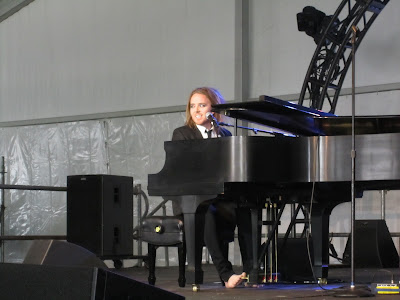 He was absolutely hilarious and charming, like always. He played a mindblowingly witty new song, but I don’t want to ruin it for any of you who are going to see him play live when he’s touring the US next month. Speaking of which, I have tickets to see him in June, and I don’t regret buying them at all. Especially since he only played for 45 minutes, which is not enough Minchin for me. 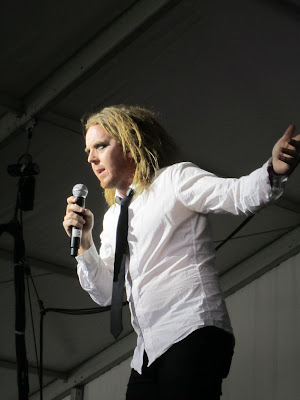 This photo is just to rub in how close I was.

The rest of Sasquatch was hit or miss. I had never seen Reggie Watts or Mad Rad before, but they were both very entertaining. The Flaming Lips were fucking horrible. I was so disappointed, since they’re one of my favorite bands. They picked one of their most subdued old albums to played from, had way too much dialog and set up between (or even during) songs, and had to resort to constant begging to get the audience to cheer. Everyone was falling asleep, and you could watch hundreds of people leaving. The lead singer couldn’t even hold a note that night. Eventually we left too – it wasn’t worth sitting through that horrible show to make it to Modest Mouse.
To make matters worse, apparently The Flaming Lips inspires everyone to light up a joint, so I was sitting downwind of a nasty stream of marijuana smoke. Ugh.
And good god, THE HIPSTERS! I don’t think I saw anyone who wasn’t a white 18 – 25 year old dressed in ironic 80s clothing with neon Native American facepaint and feathers in their hair. Are you kidding me? Though I quickly learned the only thing worse than hipsters are drunk and high hipsters, which was pretty much everyone at Sasquatch except me. Thank you, drunk hipster chick who elbowed me in the face during Mad Rad. Maybe it would have been more enjoyable if I was willing to blow a day’s paycheck on beer.
…I’ve officially become an adult, haven’t I?*
Oh well. Tim Minchin! Squeeeeeeeeee!
*Not true. I would have found all of this annoying even at age 18.